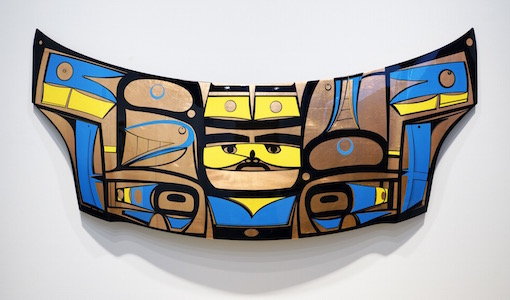 Who can resist a baker’s dozen?

We are certain that your beloved will be enthralled by this stunning piece by Michael Nicoll Yahgulanaas. Titled 2014.10.7, the work is from his Coppers from the Hood series.
Coppers in West Coast Indigenous society, particularly Haida culture, were gifted in potlatch ceremonies and represented a transfer of material wealth into corporal wealth.

The title could be read as a colloquial phrase implying a police officer in a neighbourhood, however in the rendition made by Yahgulanaas, the descriptors in the title refer to elements of the media of the piece: copper leaf and an automobile hood, a clever semantic play on those words.

The British Museum has commissioned a piece from this series that has been exhibited around the world as part of its collection.

Don’t delay, treat your true love with this spectacular piece!