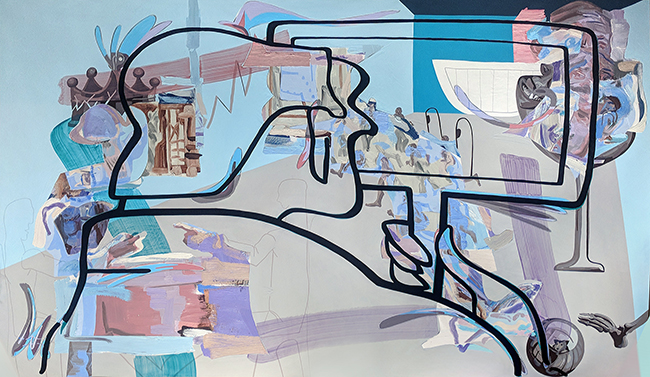 Please note:  the Artist Talk has been rescheduled to coincide with the Art Dealers Association of Canada Gallery Hop! in Calgary on Saturday, May 11 at 12:30 pm. Glenbow Museum Curator Sarah Todd will be in conversation with Ryan Sluggett!

Ryan Sluggett’s new paintings foreground his characteristically gestural drawn line through a combining of techniques on large and small scale sheets of aluminum. Observations on money, consumerist identities, and everyday life are the thread that ties them to previous bodies of work. Ryan Sluggett’s new works on aluminium tend to unfurl outward towards multiple meanings, rather than lock down a singular one. They declare both dramatic movement and inertness simultaneously. As the artists states, “they are a catalogue of possibilities of painting techniques aimed at mashing up normative manners of viewing the world.”

Ryan Sluggett is currently working towards completing a 45-minute long animation with the working title Ed Terrestrial. Telling the story of a ‘figure shaped suspiciously like a globe’, who is trapped in a suburban Cineplex. Ed Terrestrial, the hero, is subjugated into watching three short propagandistic films. The film will fuse 3-D and 2-D with stop-motion and the painterly collage aesthetic for which the artist is known, climaxing with a surprising guest star. The film will be released in the Fall of 2019.

Ryan Sluggett was born in 1981 in Calgary, Alberta. He received his BFA with Distinction in Painting from the Alberta College of Art + Design in 1999, and his MFA from the University of California, Los Angeles in 2008. His work has been exhibited throughout Canada, the US and Europe.