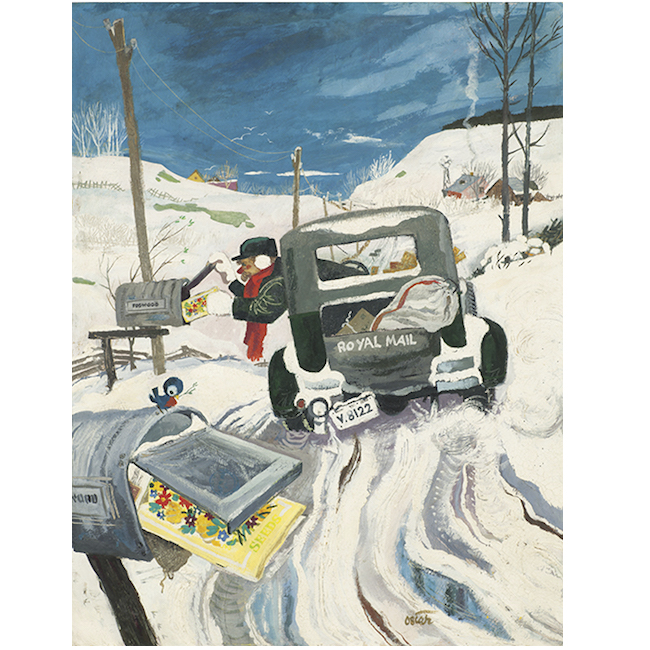 In 1946 Oscar Cahén acquired a 10-acre lot at Fogwood Farm, near King City (north of Toronto),  to build his dream home. The only existing structure on this lot was a small cabin, which Oscar converted to a cabin with studio space. While the Fogwood house was being built, Oscar shared the studio of the illustrator Frank Fogg (1915–unknown) whose family already had a home on a nearby lot.

Once his home was built and the cabin refurbished, Oscar alternated his painting practice and illustration work between the studios in the main house and the cabin. Photographs of the period underscore his preference for double studios: they show Oscar at a drafting table in one studio for his illustration, and at an easel in another studio for oil painting and for making exploratory sketches.

The painting Untitled (Royal Mail), shown above and made for the March 1, 1948 cover of Maclean’s Magazine, depicts the lot at Fogwood Farm and its rural roads and surroundings during winter.

A few years later,  Oscar Cahén built a sophisticated new house near Oakville, Ontario and moved there in 1955. He established a large studio space sufficient with multiple working areas, with a drawing table at one end for illustration and a painting area at the other end, continuing his preference for separate spaces for different media.

Mark your calendars!  Discovering Oscar Cahén (1916-1956) opens November 26, 2020 at the Centre Space in Toronto, located inside Feheley Fine Arts proper at 65 George Street in Toronto.  This collaborative exhibition is the first for Feheley Fine Arts and TrépanierBaer Gallery. A highlight of the exhibition will be Cahén’s rarely-seen masterpiece The Warrior, completed before the artist’s untimely death in 1956.