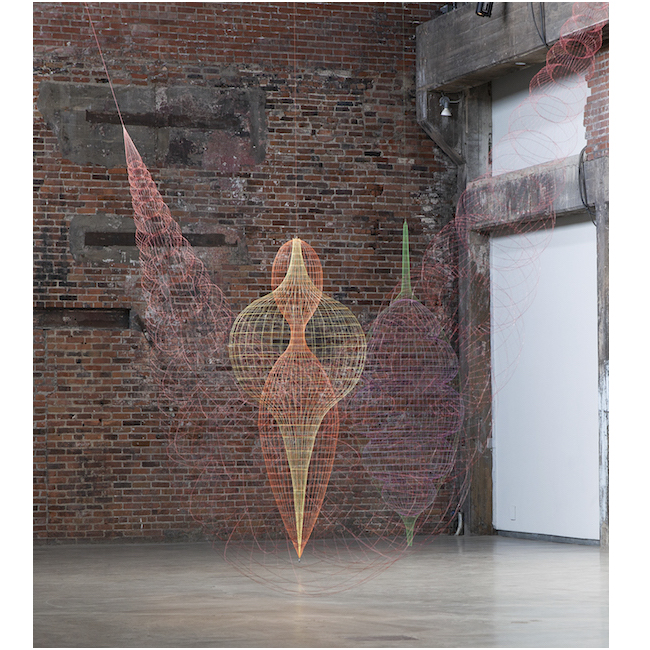 Sarah Stevenson: Before the Storm at Fonderie Darling

Six of Sarah Stevenson’s evanescent sculptures float in the vast industrial space of Fonderie Darling’s Main Hall. Silhouetted parallel and perpendicular lines connect and interweave with metal hoops hung from the ceiling. Sarah Stevenson’s vibrant and airy volumes, reminiscent of giant hoop skirts, create spaces that are both open and contained, light and dense. Some of these elegant, assertive and imaginative constructions are inspired by the biological world, such as Bean, Burn and Nimbus, while others evoke the human body,  Bruise and Spine. Other, more abstract works reference discernible elements from architecture and design, such as Spike. Sarah Stevenson’s creative process begins with the drawing of complex preparatory grid diagrams, which are then transferred into three-dimensional space, becoming a web of knotted coloured threads that trace out well-defined lines and geometric shapes.

The presence of these works, often at the limit of visibility, attracts our gaze and incites us to walk around them, so to better grasp the pieces in their entirety. When examined up close, their outer layers, made up of interwoven threads, allow us to see the inside of the sculptures, and to consider their volume1. From further away, they become almost transparent, and, depending on the background over which they are viewed, neutral or textured, the pieces softly appear and disappear into a field of visual vibration. Varying natural and artificial lighting adds another variable to the equation. Our gaze thus tries to grasp forms that are always escaping us, forcing us to constantly adjust and readjust our ways of looking. Metaphorically, the fishing line making up these sculptures prompts us to make the connection with cages, traps for the eyes. The challenge the pieces pose to our sense of vision is compounded by our dynamic physical experience of them. Seemingly weightless, hung from the high ceiling, but floating just inches from the ground, these soft and hollow forms seem to be levitating. In addition to this spatial disorientation, the works rotate almost imperceptibly on a vertical axis, a phenomenon created by the airflow within the vast space, and by visitors’ movements. The impressive scale of these pieces, defined by simple mesh canvas forms, seems out of proportion when compared to their apparent weight and density, aspects that further disrupt our relationship to them. Their tenuous appearance also contrasts with the vast space, maintaining a tension between the works and their exhibition context. These physical and visual experiments profoundly destabilize us, and indeed bring us to question our own bodies, and the space they occupy in this immense room.

Initiated in 2018 — in continuity with earlier series of poetic objects such as Under Glass (1992-1999),  Multiples (2001-2014) and Animation (2008-2012) —, this body of work represents the apogee of Sarah Stevenson’s series Wireframe, ongoing since 1997. For this exhibition, the artist seeks to push her abilities to their limit, indeed realizing the largest sculptures of her career to date, some of them double-layered, 3.4 metres high, and one metre in diametre. Existing somewhere between the organic and the mechanical, Sarah Stevenson’s works — created with virtuosity, craft, methodological techniques, and simple materials — here take on a technological appearance, resembling a vertex mesh made up of dots and nodules.

For Sarah Stevenson, the exhibition title Before the storm evokes that strange moment of calm that precedes violent weather. This relationship to time that is suspended, peaceful yet unsettling, invites meditation, and allows us to be moved by the physical experience, while remaining focused on looking and the body within an architecture that resonates with the emptiness that these works indeed contain.

1.  The earliest works (1997) from the series Wireframe were created using translucent fabric membrane.

Sarah Stevenson: Before the Storm
Installation View at Fonderie Darling, 2021