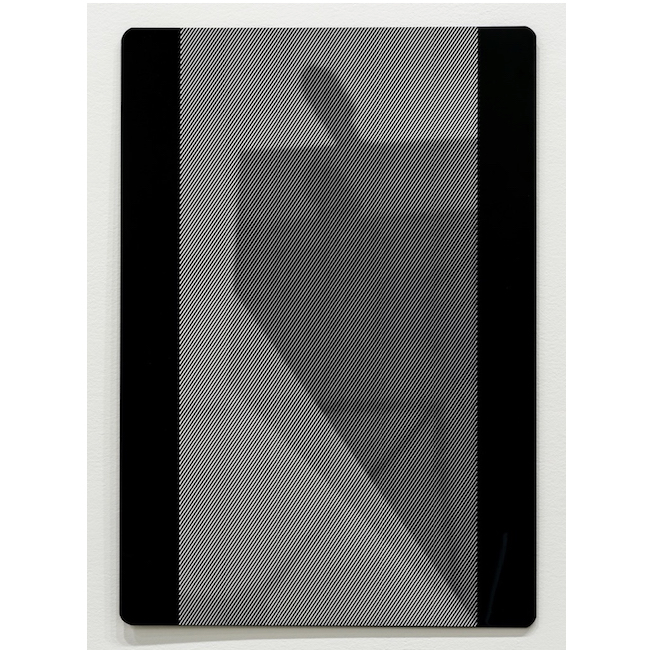 He bought them at a going-out-of-business sale at a strip-mall camera store in Calgary’s Beltline. The plates, which were used for photo-finishing, usually went for about $40 apiece. Cran bought his for $2 each, piled them at the back of his studio and promptly forgot about them.

Which is where they presumably sat for 27 years. In late 2019, the artist was reviewing some old paintings he had stashed away at the studio over the years when he came across stacks of those plates. He decided to begin experimenting with them as a base for his vinyl stencil transfers and was delighted to discover that the plates took the stencils better than anything he had ever used before. Call it a happy accident or call it an artist being resourceful. Whatever the case, Chris Cran had found something new to play with.

“The thing about making art is that it can be fun,” says Cran. “There is work involved, but discovery is fun.”

So the prolific artist spent much of 2020 at his studio creating new work using these materials while altering images on his computer using Photoshop and Illustrator programs. The resulting series, which are mostly made up of enamel paint on enamel steel, is at the heart of a new collection called Manifesto … What’s Next, which opens Dec. 12 and runs until late January at TrepanierBaer.

This commercial exhibit follows two shows at institutional galleries in 2019, including the career-spanning It’s Still My Vault at Nickle Galleries and Chris Cran: At Play at the Glenbow Museum. In 2015 and 2016, a retrospective called Sincerely Yours travelled from the Southern Alberta Art Gallery to the National Gallery of Canada, cementing the 70-year-old artist’s reputation as one of the country’s most renowned contemporary artists. For his many admirers, Manifesto will offer a glimpse of how the prolific artist has spent his time tinkering in his studio since the pandemic took hold in March. While it might sound like a cliche, fans have no doubt come to expect the unexpected when it comes to Cran. On the other hand, the new work also finds him revisiting older themes and threads as if this recent discovery has breathed new life into them.

Sculpture Shadow, which is one of the enamel paint on enamel steel pieces, springs from the artist’s longtime habit of photographing shadows cast by sculptures or people viewing art at galleries on the white walls of museums such as Glenbow or the Art Institute of Chicago. The photos provided inspiration and are the focus of his shadow series, which were created using the photo-finishing plates.

William S. Burroughs, also enamel paint on enamel steel, is a portrait of the legendary Beat Generation writer, albeit one that employs some textural trickery. Creating a portrait of a recognizable figure is not something Cran often does. But even that piece comes from his own history, at least indirectly. In 1996, Cran travelled to the writer’s home in Lawrence, Kansas, with his friend John Geiger, CEO of the Royal Canadian Geographical Society, who had gotten to know Burroughs as the biographer of his contemporary, American poet and painter Brion Gysin. While there, Cran hobnobbed with a number of Burroughs’ famous admirers, including REM’s Michael Stipe, poet-musician Patti Smith and composer Philip Glass.

“John called me up and said ‘There’s something going on down in Lawrence, let’s go down there,’ ” Cran says. “So we drove down. It was called Nova Convention Revisited. We were at Burroughs’ place every night for five nights hanging out with him. It was all these rock stars who were there paying tribute.”

These new pieces are just one part of Manifesto. Other works on display have an even more direct link to Cran’s 40-year-plus history as an artist. It will feature a series of what he calls recycled paintings, which are based on older works he unearthed during that same 2019 search that yielded the photo plates. These abstract paintings, which Cran had assumed were “duds,” were reworked into new pieces.

“It was this realization that I had, years later,” Cran says. “They’re not duds, they’re just not finished yet. Now I’ve got all this stuff I can work with rather than saying ‘Where am I going to throw this?’ ”

Regardless of how they came about, what it amounts to is a new collection of Cran’s work, which is always an exciting prospect, says Yves Trepanier, founder and co-owner of TrepanierBaer Gallery.

“He’s always pushing himself, pushing the medium and coming up with new ideas,” he says. “This is a refinement of a lot of the work that he’s been doing for the past few years in terms of that visual, optical kind of play that we see. He’s just in so much more control of the medium.”

Because TrepanierBaer is not a public gallery, it will stay open and operate under the same Alberta Health restrictions that are being applied to retail stores. That includes a limit of 10 people in the gallery at any given time, mandatory masks and a 30-minute limit on visits.

As for the title of the exhibit, it is somewhat tongue-in-cheek and refers to one of the new pieces. Manifesto is a diptych-style piece where Cran’s public declaration is purposely blurred.

Trepanier suspects the piece is at least partially a commentary by Cran, a “critical view of all that academia.”

Cran is reluctant to acknowledge that it is a commentary on anything, saying he would prefer “to leave that to the viewer.” Still, he admits there might be hints of it in the piece.

“It’s a playful thing,” he says. “I don’t mind reading about art but I’m more interested in actually looking at art. We have fabulous writers on art, like Nancy Tousley. But artists talking about art gets a bit academic. I like the silence. Standing in front of a piece of art, the most intelligent response that this nervous system can have is …”

Chris Cran’s Manifesto … What’s Next will run at TrépanierBaer until January. All visits are by appointment only. To book an appointment, call 403-244-2066 or email at info@tbg1.com.