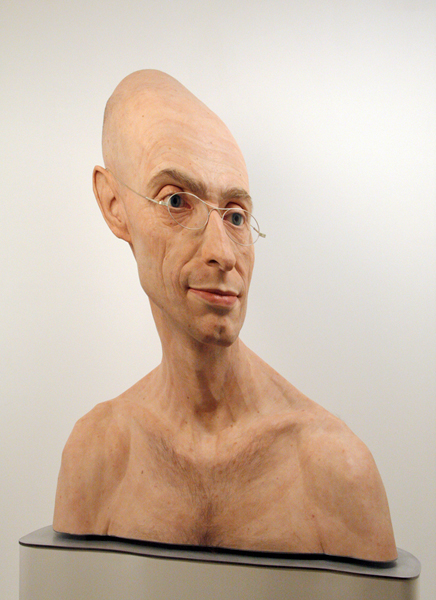 AGO exhibits body of work by Evan Penny

With his spiffy brogues, tight jeans, pressed shirt, semi-Corbusier-style glasses and generally well-groomed appearance, Evan Penny seems rather like one of those precisely rendered, meticulously produced aluminum/silicone humanoid sculptures for which he is famous, the ones where every liver spot and eyelash has been positioned just so.

Such an extrapolation would be a mistake, however. At least according to Penny. “I am actually not a button-down type of person,” he declared the other day in an interview at the Art Gallery of Ontario in Toronto, the only Canadian venue for Re Figured, a retrospective of sorts of his work from the past 10 or 12 years that has been touring museums in Germany, Austria and Italy since spring, 2011. “The work might suggest that, but in other aspects of my life, I express differently, very differently. … I actually consider myself a very impatient person, but I’m willing to submit in a way to [a kind of discipline] to pull off what I do as an artist.”

And what does that discipline entail? “Not passing judgment,” replied Penny, who, at 59, has called Canada home since the early 1960s, when his father, a missionary doctor, moved the family to northern Alberta from what is now Zimbabwe.

Viewers of Penny’s work might assume that the painstaking, multistep process he uses to go from clay model to fastidiously finished work “represents this kind of rigour of being constant in one’s decision-making.” In fact, for all the systems and frameworks he has developed in the past 30 years or so, “there’s a lot of arbitrariness. With some of the pieces, I don’t know where they’re going. Is this going to be male? Female? They may look inevitable when they’re made … but for me the challenge is to keep a process open. I sacrifice myself to that. It’s not necessarily comfortable, not necessarily pleasurable – there’s a certain phase where you’re just grinding it out – but the potential inherent in the outcome is enough that it’s worth doing.”

Penny got the sculpture “bug” early – what he calls “the basic impulse” – making things from whatever was at hand even as a child. But the decisive, vocational moment came in September, 1971, when, enrolled as an 18-year-old freshman at the Alberta College of Art and Design in Calgary, he signed up for a sculpture course. “It was basically a figurative sculpture program at that time,” he recalled. “So if I wanted to make sculpture, it had to be figurative. But literally the day I walked into that sculpture studio was the day I knew I was going to do this for the rest of my life. There was just something so clear about it; I think it was the love of the material, the clay. I had this sense of being a maker, a builder. I couldn’t draw or paint much beyond the average, but there was something about manipulating materials that had resonance.”

Remarkably, he has remained unswervingly loyal in his career to representations of human anatomy. And such devotion has been a source of anxiety – if not now, then certainly in the 1980s, when conceptualism was king and to be a figurative realist sculptor was oh so redundant, archaic, irrelevant, square.

In fact, in the early nineties, Penny did move away from the realist figure and body work – at least as an artist. He was earning a good living as a special-effects creator in the movie biz, eventually working on more than 25 films, including Oliver Stone’s Natural Born Killers, Nixon and JFK, before giving up on Hollywood circa 2002. Whatever art he was creating for himself at this time inclined to be abstract-looking casts, in beeswax, from sections of his own skin, as well as “big head fragments” – “monuments” – reminiscent of classical statuary.

These days, Penny seems entirely comfortable making body-based “extraordinary objects” and numbering the acclaimed likes of Australia’s Ron Mueck and Italy’s Maurizio Cattelan as contemporaries. “It’s clear to me that figurative sculpture isn’t just about its relationship to history … even though it very quickly attaches itself to history” and the intimidating legacy of Michelangelo, Rodin, Saint-Gaudens and Giacometti, he observed. “It’s about its relationship to our bodies and how we live in the world now. It’s about how we represent what we see, how we imagine ourselves in relation to the image-saturated environment of the present.”

The AGO show even includes four examples of that most time-tested of idioms, the self-portrait – two large reliefs (one of Penny in his late teens, the other of the artist in his 70s or 80s) and two photographs of these reliefs, all done in 2011. It’s clear, though, that the reliefs, for all their plausibility, are a sort of 3-D exercise in time travel backward and forward, present-day imaginings informed by photographs, the distortions of memory, long-held feelings, half-remembered anecdotes and experiences.

Previously, Penny used to model from real life, but in recent years he has relied more on digital scans, including ones of himself. It has its pitfalls and temptations, he acknowledged. But “one of the guiding principles for me is how far can you take that elaboration or distortion and still maintain a plausible relationship to the body, how I feel about myself, how our eyes actually work. You can do all sorts of crazy things with digital manipulation these days – twists, spirals, tie a figure in a knot to the point where it has no connection to how I see myself or others. My work’s still got to connect to the ways in which I imagine myself in an everyday encounter. That’s one of the defining limitations I’m putting on myself.”