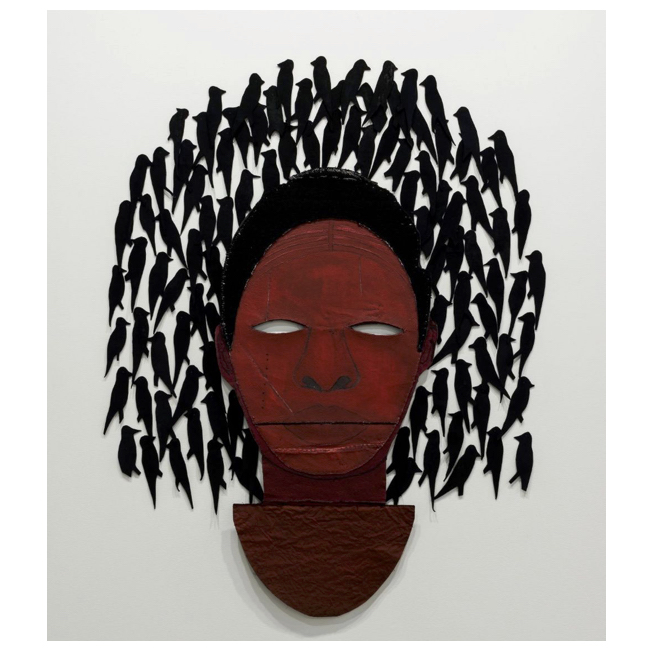 TrépanierBaer is pleased to  present Alicia Henry: 2012-2020, the artist’s inaugural exhibition at the gallery, and we are thrilled to introduce Alicia Henry to audiences in Calgary and beyond.  This exhibition is part of TrépanierBaer’s participation in the 2020 Art Toronto fair, a hybrid model of virtual and physical in-gallery exhibitions.

Alicia Henry’s practice presents various figures and portraits made from textiles and other media, inspired by people she has known, and those she has encountered in her life. These works address ideas of individuality and community across time and space. With numerous approaches to scale, these works portray individual figures, and sometimes figures shown as collective group.

As noted by Daina Augaitis,  Chief Curator Emerita at Vancouver Art Gallery, who curated Alicia Henry: Witnessing at the The Power Plant in 2019, in her overview of the artist’s practice:

For the last two decades, Alicia Henry has been exploring unconventional approaches to portraiture, using the face to represent something that is hidden, revealed and performed. Henry creates two-dimensional figures and group compositions that are commanding in their grace and expressiveness. Selecting her media carefully, she works with felt, canvas and other textiles, as well as leather and paperboard, all of which absorb drawn and stitched gestures that register a spectrum of contexts and emotions. Notions of gender and family are significant in her works, as are physical layers that suggest multiple and unfixed identities. Tender renditions of a mother with child appear, as do groupings of twenty or more females that signify formations of like-minded “families” within communities.

Henry’s compelling compositions are drawn from a multitude of references: the artist’s own memories, her collection of West African masks and events on the street or on television, to name but a few. Imbued with her perspective as an African American woman, the figures assert themselves as timeless witnesses reflecting a variety of personal and social histories.

In a recent conversation, Henry explained that she does not view her work as political, but nonetheless acknowledges that “at this time in the United States, the brown body has become politicized.” In her installations, composed primarily of dark-toned figures, a lingering melancholy evokes racial traumas suffered by innumerable groups and individuals, today and over the centuries. But simultaneously—through their direct gaze and erect composure—Henry’s multigenerational survivors exude a powerful strength and confidence. They stand in anticipation of an egalitarian future—a utopian goal that underpins much of Henry’s work.

This exhibition is on view now at TrépanierBaer Gallery and is not to be missed!

Also, a few additional works by Alicia Henry are being presented in Toronto  at ART TO Pop-Up SBG.

In an effort to keep the artist experience real and alive, Michael Gibson Gallery, Pierre-François Art Contemporain, Wil Aballe Art Projects, Stephen Bulger Gallery, and TrépanierBaer Gallery are presenting work in a mini-fair in Toronto. ART TO Pop-Up at SBG is the only gallery part of Art Toronto with a physical pop-up of this caliber. For more information on location and to register for an appointment to visit, please see below for details.

Alicia Henry (born 1966, Illinois) lives and works in Nashville, Tennessee. Her first solo exhibition in Canada, titled Witnessing , premiered at The Power Plant in Toronto in 2019, and was also shown at the Southern Alberta Art Gallery in Lethbridge that same year. Her exhibition Alicia Henry: 2012 -2020, opened at TrépanierBaer Gallery in Calgary in the Fall of 2020. Her work has also been the subject of numerous solo and group exhibitions at institutions, including the Frist Center for the Visual Arts, Nashville (2016); the Museum of Contemporary Art, Sydney, Australia (2012); the Nashville International Airport (2002); the Cheekwood Museum, Nashville (2000); the Whitney Museum of American Art, New York City (1997); and the Carnegie Museum of Art, Pittsburgh (1996). She has received numerous awards such as the Joan Mitchel Foundation award, the Ford Foundation Fellowship, the Guggenheim Fellowship and, most recently, the 1858 Prize for Contemporary Southern Art. A native of Illinois, Henry received her BFA from the School of the Art Institute of Chicago and her MFA at Yale University at the prestigious Skowhegan School of Painting and Sculpture. Henry is currently a professor of art at Fisk University in Nashville, one of the oldest black universities in the United States.

ART TO Pop-Up at SBG
Stephen Bulger Gallery
1356 Dundas Street West, Toronto, ON
October 31 to November 7, 2020
Noon to 6:00 PMTo make an appointment please click here.
The Stephen Bulger Gallery will be adhering to the City of Toronto health guidelines and is restricting occupancy. Making an appointment is encouraged by using the online gallery appointment scheduler listed above or by calling 416-504-0575. Walk-ins are welcome if space permits. Groups can enter every 30 minutes at a maximum of five people to facilitate social distancing. Masks are mandatory, and the gallery will provide hand sanitizer upon entry. Prospective guests should also note that a non-contact infrared forehead thermometer scan will also be mandatory upon entry.

Details regarding access to the virtual Art Toronto 2020 fair are listed below:

To Register for the Art Toronto 2020 fair, please click here.