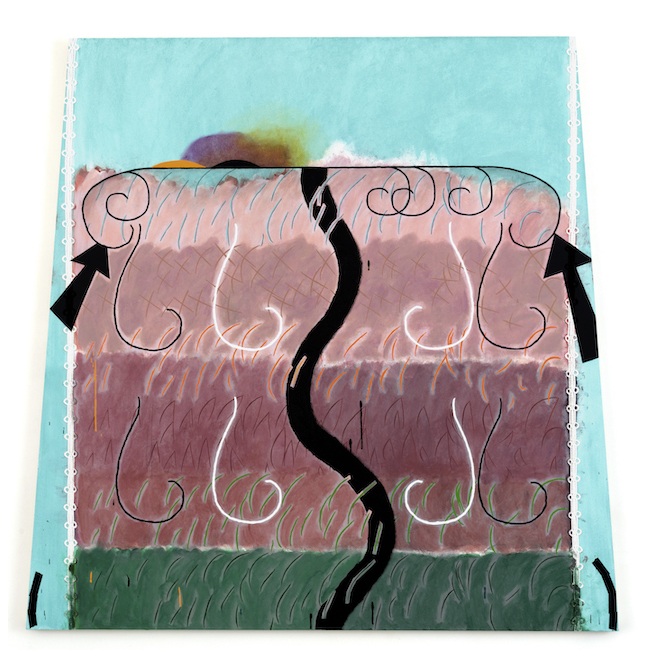 We first encountered Allison Miller’s work in 2010, in an exhibition at the Art Gallery of Calgary, curated by Marianne Elder and David Pagel, art critic for the Los Angeles Times. Titled soft core/HARD EDGE, the title seemed to summarize Miller’s approach to painting: a combination of robust, hard-edge formalism with “soft simple shapes, unfussy smudges, and wayward doodles.” At once sturdy yet expressing vulnerability: her paintings dare and provoke both maker and viewer. From stencilled drips to colour fields applied with a Crayola-like oil stick, Miller’s gestures suggest a spontaneity that belies a highly considered and strategic approach. Diverse elements combine to form active and sometimes contradictory paintings: the distinctions between the visceral and the visual collapse, and attention zooms in on the interstices between large forms and fields.

We were reacquainted with Allison last year during a conversation about contemporary painting with Ryan Sluggett. Introductions and Zoom studio visits followed.  TrépanierBaer is pleased to welcome Allison to Calgary, and to reintroduce her work to Canadian collectors and enthusiasts of painting. As she has stated:

There is a long history of deconstruction in painting – deconstructing the picture plane, but also a literal deconstructing of materials of a painting to foreground the object-ness of them: Fontana, Rauschenberg, Parrino, Gilliam – all the way to someone like Katharina Grosse. But I love that even without an kind of deconstruction, paintings may /will be objects to physically deal with, now more than ever….And in this moment…when a lot of us are spending so much time online, I think a painting will have a level of physical presence that I find thrilling to think about – the thickness of the bars, the texture of the canvas, brush strokes, and even the different sheens of paint. The paintings that I generally find the most interesting are locked in a bit of a fight between surface and material anyway….

Miller’s work can be found in the permanent collections of the Frances Lehman Loeb Art Center, Vassar College; the Orange County Museum of Art, Newport Beach; the Pizzuti Collection, Columbus; the Santa Barbara Museum of Art; and the Neuberger Museum of Art, Purchase, among others. Her work has been reviewed in Artforum, The New Yorker, Frieze, The Brooklyn Rail, and Hyperallergic, to name a few.

Allison Miller was born in 1974, in Evanston, Illinois, and lives and works in Los Angeles. She obtained a BFA in Printmaking at the Rhode Island School of Design, Providence, Rhode Island in 1996; and an MFA in Painting from the University of California, Los Angeles in 2001.