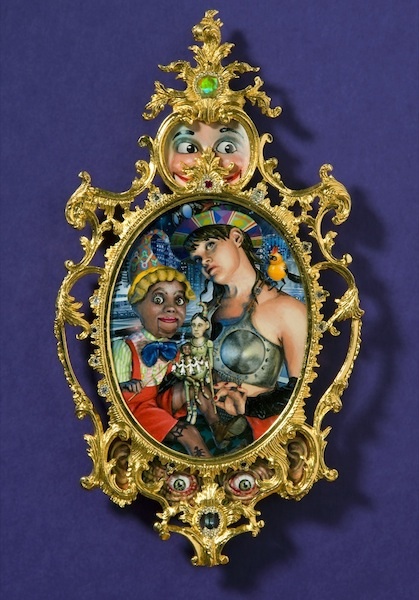 at the gallery
Summer 2012 Newsletter

TrépanierBaer is proud to announce that Chris Millar has been honoured with a Lieutenant Governor of Alberta Emerging Artist Award for 2012. This award was established for emerging artists to support and encourage them in their careers, while also serving to raise the profile of the arts in Alberta. We are thrilled that Millar‘s work has been lauded by this accolade which recognizes his contributions to Alberta’s artistic community. ( Image information: Chris Millar, Jibber Jabs and the Low Blows, 2011)

Al McWilliams unveiled his Royal Canadian Naval Monument in Ottawa in May of this year. The monument sits in a symbolic line between the Canadian War Museum and Parliament Hill on Richmond Landing, a small spit of land east of the Portage Bridge and south of Victoria Island.That in itself is significant: the monuments’s location is surrounded by water on three sides, much like Canada. The monument itself calls to mind a vast white marble cylinder, the top cut off at an angle and crowned by a gold ball, representing celestial bodies and the Navy’s global reach. Also of note, at the recent Art Basel fair, Evan Penny’s works were well received by curators and collectors alike.

Geoffrey James was honoured with a Governor General of Canada Award in Visual and Media Arts in May. As noted by Scott Connarroe, “Geoffrey James has mapped a vast and nuanced portrait of modern age… He is driven, courageous, prolific and refreshingly relevant.”  Educated in history at Oxford, Geoffrey James is self-taught as a photographer. For nearly forty years, James  has unflinchingly and masterfully investigated the way we interact with our surroundings, and what those interactions say about us as a society.

Julian Opie opens a solo exihibition of new work at Lisson Gallery in London, England. As noted by Lisson Gallery, ” The exhibition includes a striking series of walking figures, which have increasingly become an important part of the artist’s practice…his unwitting subjects reveal themselves in movement, captured in the moment, exhibiting their own idiosyncrasies in the way they carry themselves.” The exhibiton opens July 11th and runs through to August 25th, 2012.

Evan Penny’s  acclaimed survey exhibition titled Re:Figured concludes its run at the Art Gallery of Ontario this fall, after being presented in various European venues such as the Kunsthalle Tübingen, Germany; the Museum der Moderne Salzburg, Austria; and MARCA, Catanzaro, Italy. The exhibition opens in September of 2012 and runs through to January of 2013.

Ryan Sluggett is included in Made in LA 2012, the first Los Angeles biennal. Organized by the Hammer Museum in collaboration with LAXART,  the exhibition will be presented at the Hammer, LAXART, and the Department of Cultural Affairs’ Los Angeles Municipal Art Gallery at Barnsdall Park. The exhibition will feature works by 60 artists from the L.A. region, with an emphasis on emerging  artists, and will debut new installations, videos, films, sculptures, performances, and paintings produced for the biennial. The exhibition is currently on view until September 2, 2012

Luanne Martineau is included in a group exhibition at Oakville Galleries titled Freedom of Assembly. Curated by Matthew Hyland and Marnie Flemming, Freedom of Assembly brings together recent works by eighteen Canadian artists. While vastly different in styles and agendas, the artists assembled here share an exuberance about experimenting with form, content and material.  The exhibition is currently on and view runs through to September 2nd, 2012.

Micah Lexier and Michael Dumontier present Call Ampersand Response at Artexte in Montréal. It is a collaborative artwork made of images exhcanged via email. Over a period of serveral months, Dumontier and Lexier sustained an image-based correspondence by sending each other scans of book covers, found objects, drawings and illlustrations belonging to each artist’s respective collection.The exhibition is on view until September 8th, 2012.

Chris Millar is included in a three person exhibition with Ufuk Gueray and Martin Golland titled Strange Reverie at Union Gallery at Queen’s University in Kingston, Ontario. Millar’s works FACEBITOR and Dave and Becca’s Sunday will be on view. The exhibition runs from July 3rd through to September 21st, 2012

Michael Smith and Geoffrey James open TrépanierBaer’s Fall 2012 season in September. Smith will present a series of new works including the monumental Shadow Bark, 2011; works on paper; and two series of black and white paintings inspired by images of modern conflict, and by the works of John Constable, respectively. James will present new colour works from a series titled Canadian Pictures. When commenting on this new body of work, James remarked his interest in “… the slightly schizoid nature of our man-made landscape. The distance between what exists in rural and small town areas, and the corporate space of the cities and suburbs, is amazing.“