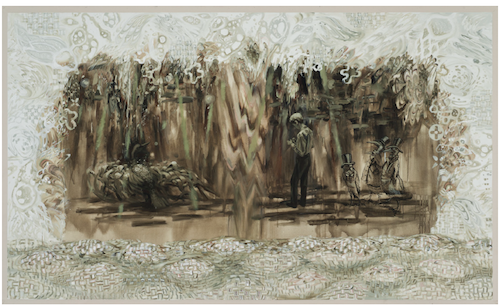 The Kitchener-Waterloo Art Gallery is pleased to present Old Masters, an exhibition of recent work by Carol Wainio. An Opening Reception for this exhibition takes place at the Gallery on Friday, March 8. The evening begins at 7 pm with an artist talk, followed by opening remarks at 8 pm. The exhibition runs from March 8 through April 28, 2013.

Ottawa-based painter Carol Wainio explores the potential for her layered canvasses to tell multiple stories. In a selection of lush and textured paintings, Wainio revisits early fables, among them Puss in Boots. Her paintings revisit well known fables to highlight the instability of wealth and how we perceive contemporary life. Human/animal relationships in Wainio’s depictions are not quite that of the master andcompanion, as we might expect. Instead, we see very well dressed birds that appear to be mocking their human counterparts. In works such as Boy (2012) a flock of birds wearing what looks like Victorian finery are suggestive of the satirical cartoons by J.J. Grandville which appeared in 19th century French newspapers. Wainio’s finely-dressed birds seem to belong to a different period of values and concerns, an era that is purposefully out of sync with the simple, at times pastoral settings in Wainio’s paintings. Further adding to the sense of multiple realities, these landscape vignettes appear to be disintegrating into abstract paintings; the satirical depiction of refined birds in this context contributes to a sense of underlying absurdity. Wainio’s complicated nesting of references alludes to our shifting relationship to media, representation and authenticity.

Artist Bio: Carol Wainio grew up in Waterloo and has exhibited widely in Canada, including at the National Gallery of Canada, the AGO, Musée d’art contemporain de Montréal, and internationally in the U.S., China, and at the Stedelijk Museum, the Venice Biennale, and the Galleria Comunale d’Arte Moderna in Bologna.