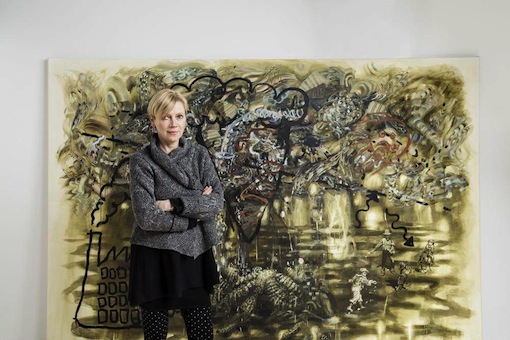 Congratulations to Carol Wainio, recipient of a 2014 Governor General’s Award for Media and Visual Arts. The announcement was made at the TIFF Bell Lightbox, Toronto in early March; the awards ceremony will be held at Rideau Hall, Ottawa on March 26 where Waino, along with seven other laureates, will receive  an award medallion from Governor-General David Johnston.  An exhibition of works by the recipients opens at the National Gallery of Canada on March 28 and is on view through July 6, 2014.

Born in Sarnia, Ontario in 1955, Carol Wainio completed a BFA at the Nova Scotia College of Art and Design, Halifax, and an MFA at Concordia University, Montréal. She lives in Ottawa where she is an Adjunct Professor at the Univeristy of Ottawa. In Canada, her paintings are represented in major corporate, private, and public collections, including the National Gallery of Canada, the Musée des beaux-arts de Montréal, the Art Gallery of Ontario, Glenbow Museum, and the Musée d’art contemporain de Montréal.

Wainio has exhibited widely in Canada, including at the National Gallery of Canada, the Art Gallery of Ontario, the Musée d’art contemporain de Montréal; and internationally in the U.S., China, and at the Stedelijk Museum, the Venice Biennale, and the Galleria Comunale d’Arte Moderna in Bologna.

Over the last five years Carol Wainio: The Book – an important survey of her work organized and curated by Diana Nemiroff, director of the Carleton Univerisity Art Gallery – was shown at five venues across Canada, and just concluded its successful run at the Galerie de l’Université du Québec à Montréal.

Carol Wainio’s work combines the visceral and painterly with the discursive to create structures for wondering not only about the practice of art, but about things that often come from elsewhere other than the field of painting. The works draw together diverse references and approaches to explore the nuances of history, narrative, representation, the environment, and the changing nature of human experience.

Please visit the Canada Council for the Arts website for more details pertaining to the Governor General’s Awards for Visual and Media Arts and Carol Wainio: