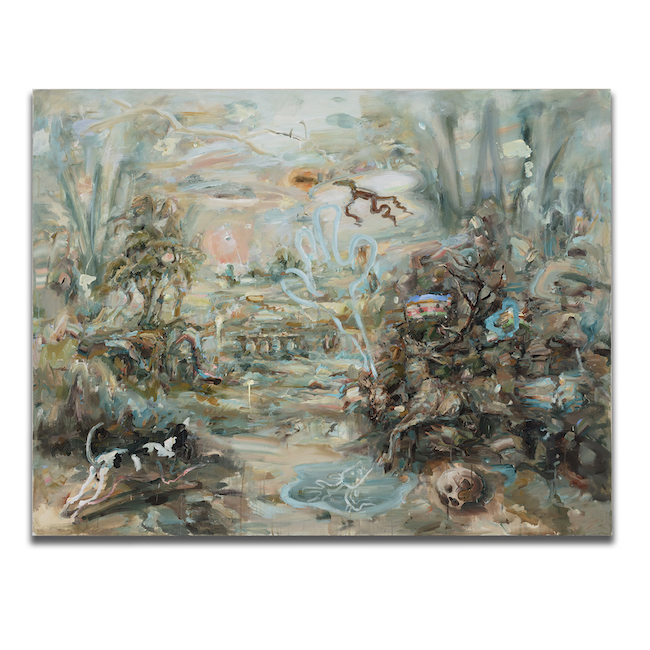 TrépanierBaer is pleased to present Carol Wainio: Vers L’Incertitude, an exhibition of new and recent work.

Carol Wainio belongs to the generation of Canadian painters whose artistic practice was influenced by the conceptual and political currents permeating the world in the 1970’s. She is known for both her technical ability and generosity of imagination. On the one hand, Wainio’s paintings are emphatically constructed, drawing attention to the shaping and delineating character of paint and line, as well as between representational styles. On the other hand, her work engenders an approach to painting that is marked by abstract and expressionist concerns, and by a desire to use painting as a means to think about representation itself.  Her paintings are visually and conceptually full: dense passages of paint compliment metaphorical layers replete with references to the past and present; to popular and high art, and their attendant modes of representation.  In her recent work, Wainio persists in her sensitive interest in creating lush and textured paintings highlighting characters from literature that emerge from areas of paint applied as multi-coloured passages and gestures of swirls, ripples, and curls.

My work uses the slow, historically laden medium of painting to make work where modes of representation (past, present, high art and vernacular) meet and engage in a discursive, visceral wondering about history, representation, narrative, experience, and the current climate (in all its meanings). It draws together diverse sources – historical illustration and its forgotten offshoots in early advertising, archival or contemporary photographs, genre painting, or children’s drawings – to mingle in paint grounds, investigating or re-staging older narratives of transformation, desire, scarcity or excess, while reflecting on the now….

Recent work engages earlier narratives. Unlike fairy tales, Aesop’s fable animals were not repurposed to sell shoes or matches; they embodied more enduring human characteristics or morals. But the ground of fable’s anthropomorphized animals has shifted: the human natures they were assigned now echo with resonance….

I have always been drawn to relationships between figure and ground in general, to marginal and vernacular traces of visual-material culture, to narrative and history and their expressions and illustrations over time. In this work, past iterations meet and mingle discursively in pictorial “fields” or forests; a dog talks about freedom with a wolf, or he drops his meal in the river, paralyzed by jealousy in front of his own reflection. A wolf tells ridiculous lies to a lamb before devouring it. Dead hares from 17th century genre paintings are overthrown and reborn to race with a turtle with a composted shell from children’s drawings. Animals speak to a current human generation, abandoned to its fate by selfish elders.

This exhibition is not to be missed.

Born in Sarnia, Carol Wainio now lives and works in Ottawa, where she is Adjunct Professor in the Visual Arts department of the University of Ottawa. She attended the Nova Scotia College of Art and Design and the University of Toronto, and completed a Master of Fine Arts at Concordia University in Montréal (1985).  In 2004, she was elected to the Royal Canadian Academy of Arts; and in 2014, she received the Governor General’s Award in Visual and Media Arts.

She has exhibited widely in Canada and internationally. Selected recent solo exhibitions of note include:  Fabulisme/Paroles aux Bêtes, Occurrence Espace d’art, Montréal, 2021; Disasters for Little Children at the Diefenbunker Museum, Ottawa, 2019; Stories, Seasons, Paul Petro Contemporary Art, Toronto, 2017; and Old Masters, Kitchener Waterloo Art Gallery, 2013. In 2010, Wainio’s work was featured in a travelling exhibition, Carol Wainio: The Book, curated by Diana Nemiroff, and organized Carleton University Art Gallery, the exhibition was circulated to the Kelowna Art Gallery, 2013, and the Galerie UQAM, Montréal, 2014. The Book displayed Wainio’s interest in the evolution of fairy-tales, the art of the copyist, industrialization, and the narrative power of images.

Her paintings are represented in major corporate, private and public collections, including the National Gallery of Canada, the Musée des beaux-arts de Montréal, Glenbow Museum, the Art Gallery of Ontario, and the Musée d’art contemporain de Montréal.