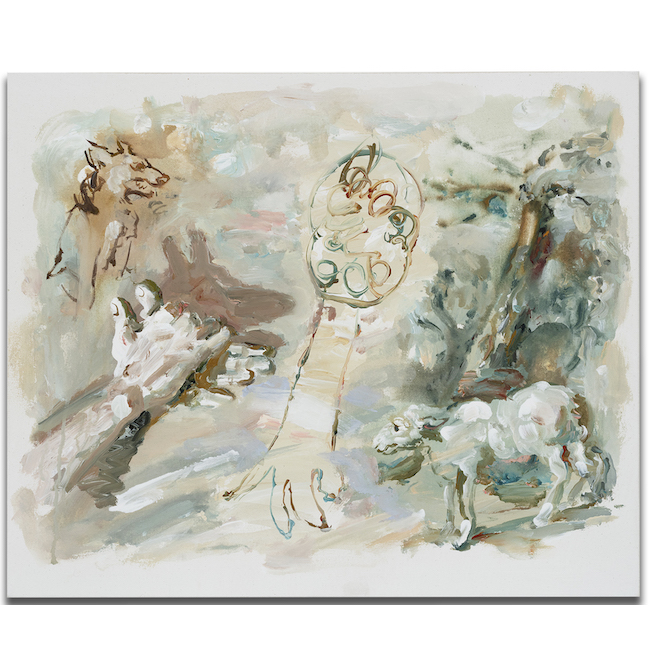 We live in perilous and uncertain times. As we face potential losses of plant, animal and human life, we may also wonder how climate change will alter our culture and the stories we tell. What happens to Hansel and Gretel if the forest is stripped away? Will fables lose meaning when animals disappear?

Such thoughts are deftly presented in Vers l’incertitude, an exhibition by Ottawa painter Carol Wainio at TrépanierBaer in Calgary until May 28. The show – its title translates as “toward uncertainty” – features 19 paintings that allude to familiar fables and fairy tales as cautionary metaphors for climate change. These works, which span 2018 to 2022, also borrow from children’s literature, historical paintings and vintage photographs or illustrations.

Wainio, who teaches at the University of Ottawa, received a 2014 Governor General’s Award for Visual and Media Arts. She is known for lush and intelligent narrative paintings skilfully (and surprisingly) created with acrylic paints. Her delicately crafted yet complex canvases offer explosions of muted colours, vibrating gestural marks and an enthralling luminosity and depth. Her surfaces and pictorial spaces shift seamlessly between abstraction and realism, often interrupted by signs or symbols like question marks and smiley faces.

In Tabula Rosa, a fluffy sheep lays passively on the ground gazing sleepily at viewers. Floating above are pages illustrating a wolf and a hand with wishfully crossed fingers. The landscape is idyllic, but the sky feels turbulent, as though a storm is brewing. The painting, while beautiful in its creamy pinkish play with light and shadow, makes one uneasy. There’s a story here, and one that might not end well. The sheep, which blends easily with the scenery, embodies the land, while the wolf looks hungry. The crossed fingers seem merely to hope for the best, rather than taking action to forestall the coming drama.

Fairy tales, and more recently fables, have occupied Wainio for a decade or more. Her fascination with children’s stories meshes wonderfully with her aesthetic sensibilities, including her use of pastiche. For example, in paintings based on Aesop’s The Tortoise and the Hare, Wainio evokes dead hares from 17th-century still-life artists, such as Dutch painter Jan Weenix. These images may make one think of trophy hunting, pointing to human arrogance and greed as factors in the current environmental crisis. In contrast, Wainio renders her tortoises using childlike doodles or gestural marks. Perhaps purposeful plodding, she seems to suggest, will better help humans mitigate climate change.

Across all her paintings, Wainio uses an earthy and romantic palette, building pictorial scenes with delicately layered brushstrokes that dance playfully between passages of shimmering light, swirling lines, textural patterns or foreboding shadows. In The Deer and the Pool, for example, a majestic stag sees its reflection in a cerulean blue pond that shimmers in the foreground. There’s a darkly painted mass where the stag’s antlers are ensnared in the branches of a tree. A hunting dog, rendered in ghostly form, bounds eagerly forward. If the dog represents humanity, this surely is another warning.

A common fairy tale theme is children alone in the woods. The dangers are particularly evident in Lost Forest, where a child hides behind a tree surrounded by tumultuous foliage, violent scribbles and childlike doodles. This painting points to the ways we are abandoning future generations to environmental devastation.

Yet, despite their dark mood, Wainio’s works are lushly atmospheric, exuding magical capacities for transforming anthropomorphized animals of yore into poetic harbingers for the new challenges we face.