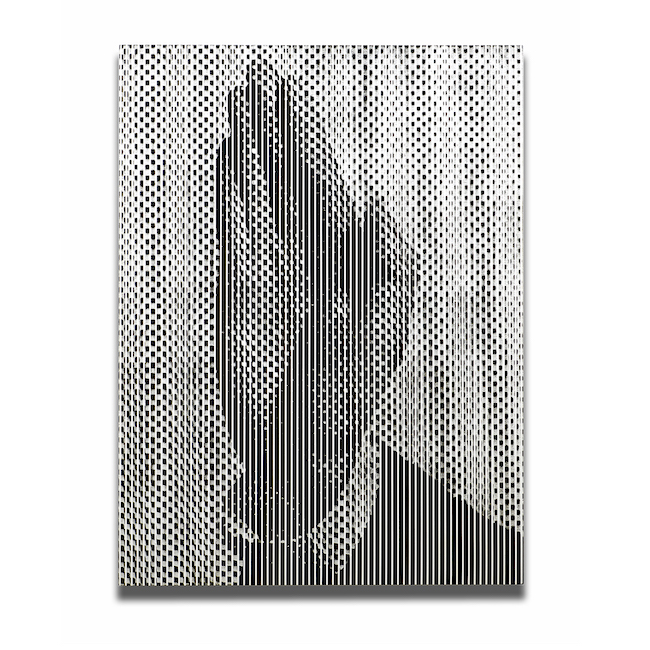 Chris Cran at TrépanierBaer – Talk to the Hand

On view now and for sale at TrépanierBaer is a rare, major Chris Cran painting from the early 90s titled Gesture #5 (1992) from his sold-out series known as the Hand Gesture Paintings.

Measuring over six feet tall and five feet wide, this arresting painting depicts the inside of a hand with its fingers and palm slightly curved inwards. The half-tone figurative image emerges from a series of vertical stripes and dots, that create the illusion of the undulating folds of a curtain.

As Cran has described:“ Hand Gesture #5, 1992 was one of six paintings (of hand gestures) exhibited in 1992 in an exhibition titled Chris Cran – New Work.  The Hand Gesture Paintings  was a major series I produced at the time… My main interest in this body of work was the reconstruction, by the viewer, of an image that was obscured both by scale and visual interference of stripes and patterns, which continue to play an important role my subsequent work.”

Is the hand in front of the pattern of lines and dots or behind it?  Does the hand wave to viewer, as a gesture of greeting or parting? Does the hand suggest that the viewer should stop and stand in place and proceed no further? Or does does the hand cheekily suggest that the viewer should address themselves to it, and no one or nothing else? These interpretations, and any others you may have, are gladly entertained. But don’t take our word for it: come and see the painting for yourself!

Available now for viewing on-line is the much-loved video titled Chris Cran: Loved by Millions, made to accompany the exhibition of the same name at the Art Gallery of Winsdor in 1989.  Loved by Millions traces the journey of Chris Cran by air from his home city of Calgary to Detroit, and then by limousine to Windsor, to attend the opening of his 1989 solo show with his broker-agent. Of course, hilarity ensues from plenty of high jinks and low jinks too! To watch the video, please click here.
Image Credit:
Hand Gesture #5, 1992
Oil and acrylic on canvas
80” x 60”