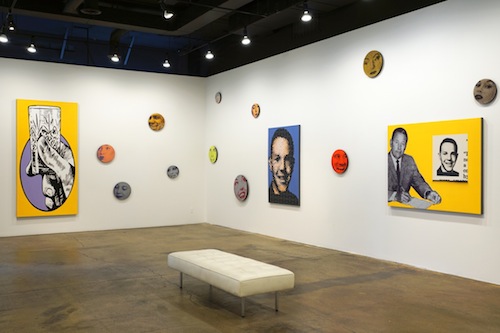 When I first viewed Chris Cran’s paintings in a survey show at the Kelowna Art Gallery in 1998, something pricked my senses. It was not just his adroitness and competency working at large scale. More intriguing was how his portraiture both baffled and beguiled. In his latest solo show, Candidates and Citizens, these tenets still hold true. But what about the depth of his practice: what underpins the content? For instance, how does the incorporation of lens-based media fit with his oeuvre, and after 35 years in the field, what’s at stake?

Cran, who is based in Calgary, emphasizes that his work is not all about paint. At the outset of his career, he earned money by undertaking portrait commissions rendered from projected photographs of his subjects. Thus started a four-decade foray into representation and perception, a trajectory that has seen him progress through figuration, painterly twists on genres such as still life, landscapes, crowds and hand gestures, often in the service of abstraction; and, more recently, photography and collages that, although produced as digital editions, are rendered with painterly aplomb.

As with much of the earlier work, Candidates and Citizens is manifest with formal references to Pop Art: blocks of colour, a giant speech bubble and graphic illustrations fill the main gallery. But the work is far from illustration. Although many pieces are rendered in half-tone dots – a technique associated with photographic reproduction, but different than Lichtenstein’s use of Ben-Day dots – the images, whilst emblematic of fame or celebrity, have no discernable identities. The faces Cran depicts are appropriated from the everyday, and then re-articulated as both a collective and as a series of individual characters in conversation with one another, their gazes shifting around the room.

The significance of individuals is central: every self has value. In a world where there’s an unhealthy expectation for greatness, Cran elevates anonymous selves to some higher level whilst simultaneously suggesting that you don’t need to be an icon to be somebody. People may search his subjects, expecting an Andy Warhol Marilyn or a Marcus Harvey Myra, but instead the gallery is “populated” with folks like you and me. As Cran says: “It’s about a sense of play.”

The distance between art and audience is key. From afar, the 12-foot-wide The Candidate Sez presents a blurred-out face in soft contrast to the hard, black edges of a giant speech bubble and attendant portrait. But on nearing the picture plane, the composition begins to buzz, forms appearing as if edged by pinking shears. What’s left is the sense that there’s a conceptual concern with appearances behind the buzz of many candidates’ grandstanding.

A nod and a wink from the artist: Size matters, but so does substance.

The National Gallery of Canada has collected four of Cran’s works over the years. In 2012, it acquired five additional pieces on paper and, this year filled out its inventory with four more significant works, including some from previously collected series. The substance of Cran’s practice appears consolidated. With talk of another survey show, keep an eye out for what’s at stake: the role of public citizenry is key.