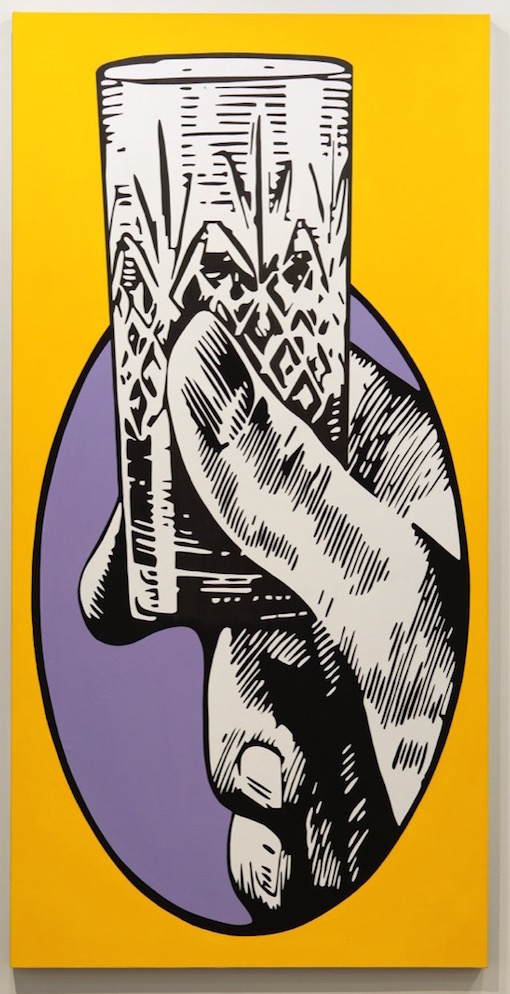 Nearly three decades after his exhibition Inherent Vice, Chris Cran returns to SAAG with Inherent Virtue, a selection of new work loaded with his trademark wit that pushes the medium of painting in new directions.  His paintings continue to reference a variety of styles and genres, from pop art to op art, still life to portraiture, while increasingly challenging the codes of the medium and examining the processes of its interpretation.

How we ‘look at’ and ‘read’ paintings has long preoccupied Cran.  Works such as Almost There (2015), which depicts the bust of a beautiful and elegant woman, her eyes cast to the side, are entirely seductive.  Painted in grey scale with photographic realism, the work compels the viewer closer, yet upon approaching it, the image vanishes, replaced by nothing more than a set of diagonal black lines pulsing from wide to thin and back again.  Representation transforms into abstraction and optical play, revealing his predilection for painting’s illusory prowess.  With Cran’s work, there’s always more to see than meets the eye.

Central to the exhibition, Inherent Virtue also includes an assortment of tondos (circular and oval shaped paintings) with closely cropped faces that borrow a vintage aesthetic like one might see in a magazine from the 1950s.  Described as ‘Chorus Paintings,’ they are more than just another pretty face.  Cran sees them as intermediaries between other works and the viewer – much like the historical ‘Chorus’ used in ancient Greek plays.  Situated such that the faces direct their gaze at Cran’s other works in the exhibition, the Chorus Paintings offer commentary through their expressions – be they smirking, ecstatic or suspicious.  They influence how the audience interprets the work and, by adding emphasis to the act of looking and interpretation, signal the audience to reconsider the action itself.  In effect, the audience is asked to consider its shared role in the production of meaning.  As a result, the appropriated images Cran includes become secondary, but no less important for raising the concept of tone.  For Cran, reading a painting becomes one part of appreciating how its tone is built up of content, process, history, style, and subjectivity all inherently uncertain, unstable, and in flux.

Chris Cran is a senior Canadian artist who lives and works in Calgary, Alberta.  He studied at the Kootenay School of the Arts in Nelson, BC and graduated from the Alberta College of Art and Design (ACAD) in 1979.  He returned to ACAD to teach from 1990 to 1993, and again from 1998 to the present day.  Cran has exhibited widely with many of his works included in important private and public collections, among them the National Gallery of Canada and the Art Gallery of Alberta.  Cran’s work has been reviewed widely including The New York Times and Canadian Art Magazine.  Chris Cran is represented by TrépanierBaer Gallery in Calgary, Clint Roenisch Gallery in Toronto, and Wilding Cran Gallery in Los Angeles.

Chris Cran’s Inherent Virtue is part of a multi-partner survey of Cran’s work, which includes exhibitions at the Art Gallery of Alberta and the National Gallery of Canada.  Funding assistance from the Canada Council for the Arts, Alberta Foundation for the Art, and City of Lethbridge.

Be sure to check out Chris Cran’s upcoming exhibitions at the Art Gallery of Alberta and National Gallery of Canada:

A celebration of acclaimed Alberta artist Chris Cran’s career with a major exhibition including over 100 works surveying Cran’s artistic production over the last 30 years. Chris Cran is one of the most influential Alberta artists working today, and one of Canada’s preeminent painters of the last few decades.