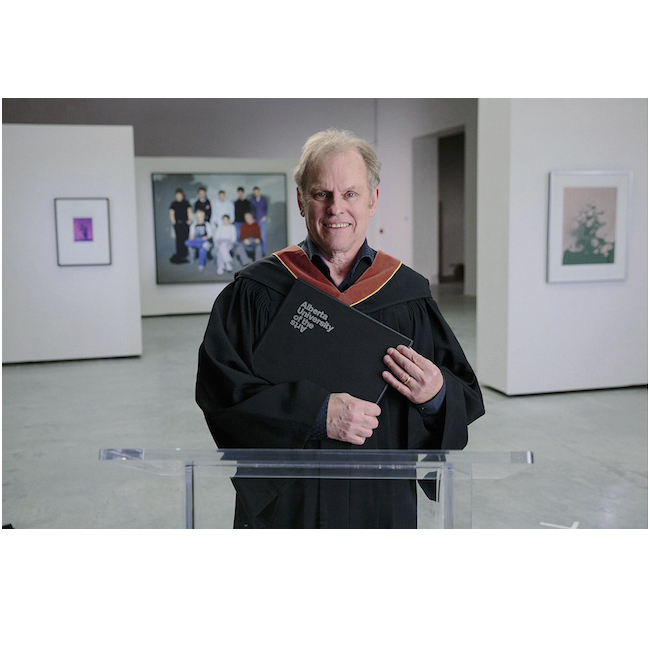 This is what he has always told students considering studies and a career in the arts, and their parents. He included this wisdom in his acceptance speech, when receiving an Honorary Master of Fine Arts this May from Alberta University of the Arts (AUArts).

Cran grew up in a house filled with his grandfather’s watercolour paintings. But it wasn’t until an artist friend gave Cran a canvas and paint at the age of 20 that he discovered he had inherited a love and talent for painting. Five years later, Cran decided to pursue his dream by getting formal training and education in the arts.

In 1979, he graduated from AUArts, which was formerly known as Alberta College of Art and Design (ACAD). He embarked on a rich life of art and education, with a successful 40-year career still going strong that includes stints teaching at AUArts. Cran has exhibited his works across Canada and internationally, won numerous awards, and has earned a reputation as one of the most notable painters in Canada.

Cran is a keen observer with an innate sense of curiosity and playfulness. He has explored many styles and genres over the past four decades, ranging from photorealism, pop art and abstract, to self-portraits, landscapes and graphic art. Along the way, Cran has experimented with a multitude of techniques and tools, while continually challenging viewers’ perceptions of art. Much of his work is underpinned by a sense of tongue-in-cheek humour and wit.

The Self Portrait Series, created between 1984 and 1989, featured the artist in often humorous situations with works such as Self-Portrait Accepting a Cheque for the Commission of This Painting and Self-Portrait Watching a Man About to Shoot Himself in the Foot. Next, he created striped paintings with half-tone dots, inspired by an ad in a 1950s pulp magazine, which create an optical illusion.

In 1993, Cran began a series of abstract paintings after noticing that, while painting with black paint, his vertical brushstrokes appeared dark, while his horizontal brushstrokes appeared light. That eventually led to a series of abstract paintings that flipped from negative to positive, depending on where the viewer was standing.

Cran’s latest collection, called Manifesto … What’s Next, is a series of works mostly made up of enamel paint on enamel steel. Just before COVID-19, Cran came across stacks of photofinishing plates he had bought from a camera store decades earlier. He used the glossy black enamel surface as a base for his vinyl stencils. “They took the vinyl stencils better than anything I’ve ever used,” Cran says.

Creating is about a sense of play, which is a lesson he learned as a student. In his early years, the school system made learning seem like a chore, he says. “It wasn’t until I got to art college that I saw that I was learning, but more importantly, that there was pleasure in learning,” he says. “I was not restricted, and that was an amazing experience.” That, he adds, was the great gift he got from AUArts.

That same AUArts experience continues for aspiring artists. Today, 70 per cent of the course work is in arts studios, providing hands-on, experiential learning, while the university-level academic component is rigorous. This equips students to be ready to meet the problem-solving challenges they face as emerging artists after graduation. The University’s small size of 1,200 students also offers an intimate learning experience and helps produce successful artists such as Cran and many other celebrated alumni including painter Alex Janvier and sculptor Katie Ohe, both past Honorary MFAs. Trail blazers of the current generation include alumni Simone Saunders, Fiona Staples and Jillian Tamaki.

Founded in 1926, AUArts is the only art, craft and design university in Alberta and the Prairies, and one of just four in Canada. The university is a key driver of the creative economy in Alberta and beyond, and the education it provides leads to many successful career paths across a variety of sectors.

“The rigour in Chris Cran’s work is a testament to the professional studio-based degrees we have been offering for many decades,” says Dr. Daniel Doz, president and chief executive officer of Alberta University of the Arts. “Our programs not only provide students with the necessary skills needed to excel in their chosen path, but also provide them with the critical thinking and analytical skills that today’s fast-paced, changing world demands.”

Grad Show 2021 is an exhibition of Alberta University of the Arts’ new graduates. Visit auartsgrad.ca to see the exciting works that the next generation of artists are producing. Like Cran, these are the influencers of visual culture.