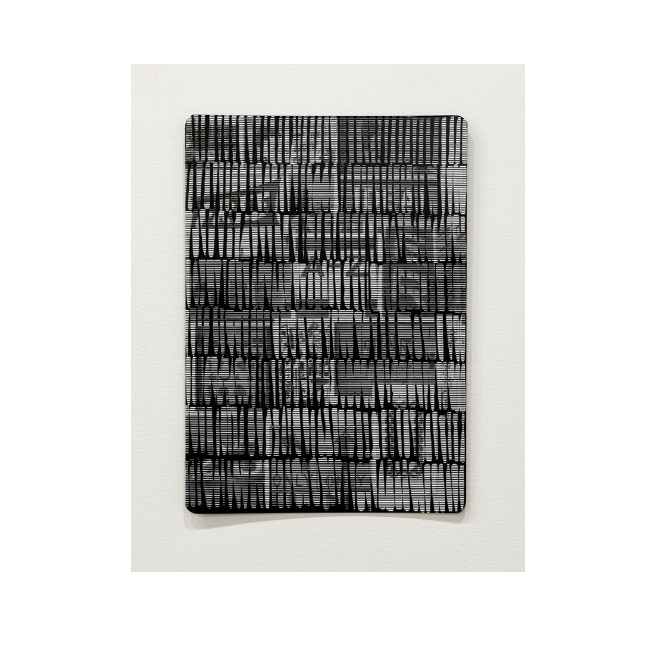 Chris Cran – The closer you get and the longer you look, the more these paintings reveal

At first glance, Chris Cran’s show at the TrépanierBaer Gallery in Calgary looks like a simple exhibition of black-and-white paintings. Some 26 of the exhibition’s 32 works were made with enamel paint on steel photographic plates that Cran purchased in 1993 from a camera store that was going out of business. The plates sat around his studio until early 2020, when he started to experiment and discovered they worked perfectly for painting with stencils.

On one level, Manifesto … What’s Next reads like a story book, each image a chapter from Cran’s journey as an artist. The images range from op art to abstract expressionism and from street photography to figure drawing. There’s a strong urban street-life sensibility, with fragments of signs, billboards and advertising. The works look like they are painted on glass, not steel, as they have a glossy finish. With their rounded corners, you might even think you’re looking at a large-format iPhone.

Individually, the paintings are complex, both visually and contextually. From a distance, Nondrian looks like a fragment of a street sign, but as you get closer you begin to see what looks like a frame. When you read the title, you realize it’s a play on the work of Dutch artist Piet Mondrian. This is the case for most of Cran’s art: The closer you get and the longer you look, the more it reveals.

From afar, Only Only looks like a black-and-white Jackson Pollock abstract expressionist painting. But draw closer and behind the brush marks in the foreground you will see the words “only only.” And if you look even more carefully, other images will begin to emerge.

Using Photoshop and Illustrator, Cran has reworked and reused many old stencils, images and ideas in this body of work. Perhaps this isn’t surprising as he’s had major retrospectives over the last few years that have allowed him to revisit earlier series.

The term “manifesto” is usually associated with groups that want to promote a new social, political or aesthetic idea. Here the common thread is the tension between foreground and background. Trying to resolve them simultaneously can make your eyes – and your mind – hurt. It would seem Cran’s personal manifesto is to examine both what’s in the background and in the foreground, while using the past as a catalyst for what comes next. ■

Chris Cran: Manifesto…What’s Next at the TrepanierBaer Gallery in Calgary from Jan. 5 to Jan. 23, 2021.