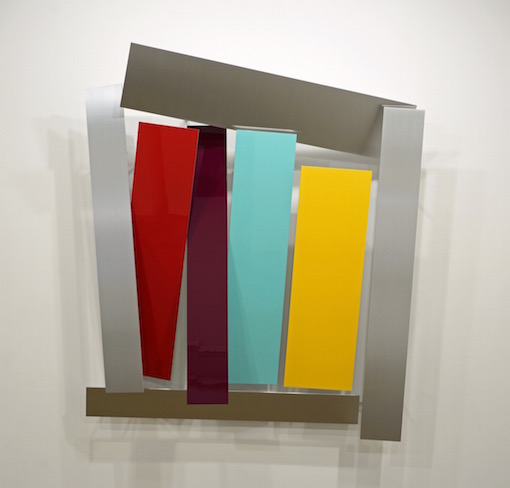 Christian Eckart is known for his Andachtsbild, Eidolon Paintings, White Paintings and Icon-Type series. They all employ, to some extent, some of the materials and techniques traditional to religious artworks since the beginning of the Renaissance. In these works, gilded mouldings and panels set in configurations that recalled altarpieces, cruciforms and so forth were presented in combination with contemporary materials such as plexiglass, formica and industrial paints.

His focus in recent years has been on other hyper-realized paintings generally made from aluminum and hand-polished automobile lacquer. Series such as the Sacra Conversazione Paintings, Regular Paintings, Zootrope Paintings and Curved Monochrome Paintings are made in this way. The actual paint process used in these works is one developed by Rolls Royce early in the 20th century and based on the techniques of Chinese Lacquer Ware.

The palette of these works indexes, discloses and/or builds upon iconic and emblematic colors or combinations of colors formalized in religious painting of the Renaissance and Baroque periods, and beyond.

Although the Sacra Conversazione Painting – Versione Follia #1 is made of aluminum panels and is literally static, the placement of panels at various angles suggests an animated and kinetic movement as if they were ethereal elements gracefully dancing on air.

Come to TrépanierBaer to see this stunning piece, and have a bite of chocolate and a sip of champagne in honour of Valentine’s Day. Sacra Conversazione Painting – Versione Follia #1 will make you smile with your heart! We look forward to seeing you.