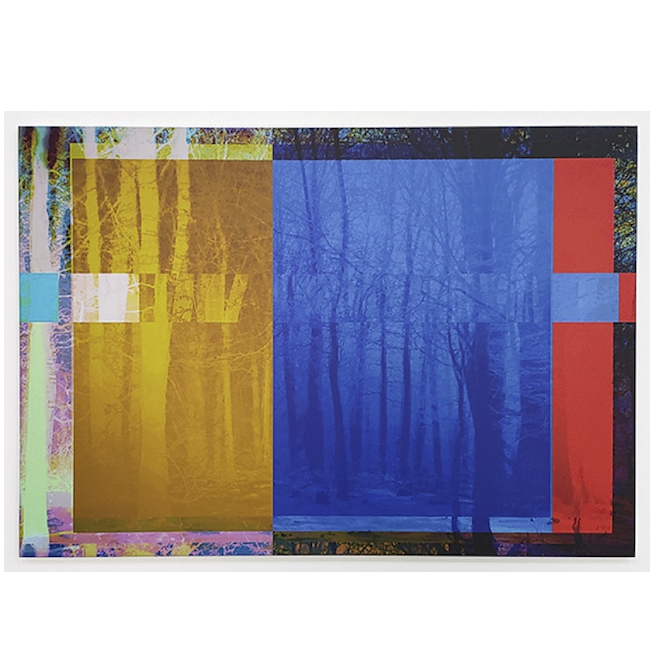 TrépanierBaer is pleased to announce the installation of an new work by Christian Eckart for  the offices of Osler, Hoskin & Harcourt LLP in  Calgary.  Measuring over 7 feet high and 18 feet long,  and printed on 3M luster laminate vinyl, Cryptocumulus is part of a new body of work by Chrisian Eckart that continues his investigation and articulation of abstraction and the sublime  in a post-modern context.

These new, large-scale works re-present photographs of various pristine locations seemingly untouched by modernity such as woodlands and cloudscapes.  They recall early 19th century paintings from the Northern Romantic movement such as Casper David Friedrich’s The Abbey in the Oakwood (1809-1810), and J.M.W. Turner’s  Snow Storm: Steam-Boat off a Harbour’s Mouth (1842).  These artists saw the grandeur of  nature and the awe it inspired as the most sublime object, and Eckart’s new work recalls the trope of the sublime and its ineffable beauty.

In Forest 1 , (2021), a stunning new work recently released from the studio, Eckart’s re-presentation of a seemingly endless forest scene was inspired by Gustav Klimt’s birch forest paintings, and the grandeur of nature itself as admired by the 19th century painters listed above. This image printed on canvas is distilled behind thin translucent veils of jewel-toned  geometric spaces, one atop the other, that create discernible layers of  image and colour. This deconstruction of colour and subject continue Eckart’s interest in the reverse engineering of paintings to re-present subject and medium, and the  numerous discussions this avenue of pursuit entails.  These physical layers are visual cues to the multiple layers of meaning inherent in the work, and its whole conceptual design.

TrépanierBaer will be releasing more images of works from this series as the summer unfolds.