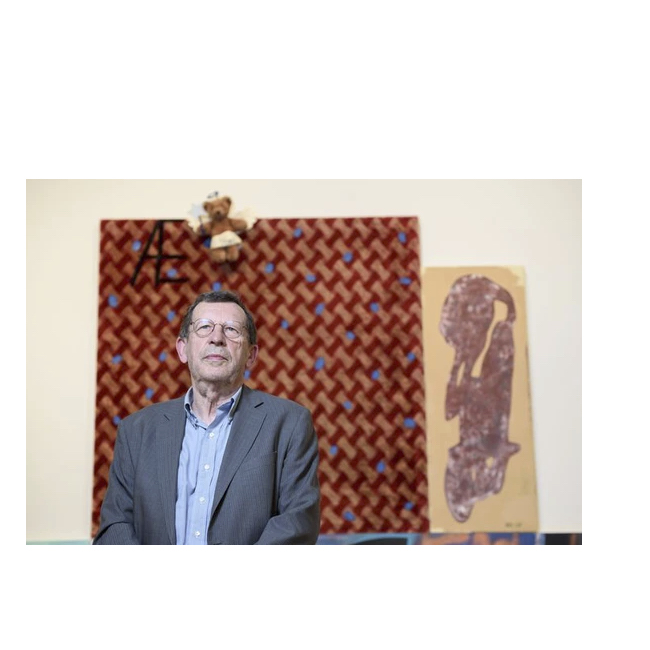 It has been 30 years since artist Ron Moppett created For Painting, a “picture puzzle” collage mixing stencilled shapes with oil and acrylic paint.

Moppett emigrated to Calgary in 1957, attended what is now The Alberta University of the Arts in the mid-1960s and is considered one of the country’s most respected artists. So it’s understandable that the prolific painter has not kept track of the fate or whereabouts of every work he created over the decades. So he was quite pleased to see For Painting hanging among five of his other works in Contemporary Calgary’s new exhibit, Everywhere We Are. When the piece was created, he had a studio in the old Nelson Block building on 8th Avenue in downtown Calgary. “The roof leaked in the rain, but the space was gorgeous,” he says.

For Painting is not the oldest of his pieces on display. But experiencing it 30 years after he created it offered the artist “a moment for reflection and reminiscing.”

“I thought it was long lost,” says Moppett, in an interview with Postmedia. “It’s great to see old friends. Now I can remember making it. I keep a log of what I do and try to keep track of things. I lost a few things in the flood, that kind of thing. Sometimes things just drift off and I really thought it was lost.”

All of the pieces found in Everywhere We Are have come from the private collection of Calgary’s Ken Bradley. Thirty-three Canadian artists are represented in an exhibition that covers painting, mixed media, film, photography and sculpture. The work spans nearly five decades, offering a glimpse at a vital period of Canadian contemporary art through the lens of one collector.

It is one of two new exhibitions at Contemporary Calgary, which reopened its doors on June 17 to the public. While too sprawling and eclectic to neatly sum up under thematic threads, some of the public talks and programs planned around the exhibition will explore areas that are both thematic and more pragmatic to art collection, including conservation, spirituality, neuroscience, deep collecting and philanthropy. The exhibition as a whole is also supposed to “complicate” questions of art and ownership.

“Every work in this exhibition is something you need to bring your own experiences and memories and context to to enjoy,” says Ryan Doherty, chief curator of Contemporary Calgary. “That is at the heart of what Ken wants to address.”

It’s a rich, if occasionally overwhelming, experience to walk through. Pieces range from ANDDNA, the sole sculpture in the exhibition by 84-year-old conceptual art pioneer Iain Baxter& made up of neon lights, plexiglass and steel sculpture; to 12 pieces from Calgary-born, L.A.-based artist Ryan Sluggett, whose work ranges from his spare 2014 emulsion on fabric Self-Portrait with Peach Shape to 2006’s surreal and slightly nightmarish 14-minute animated film Diderot’s Indulgent Vistas.