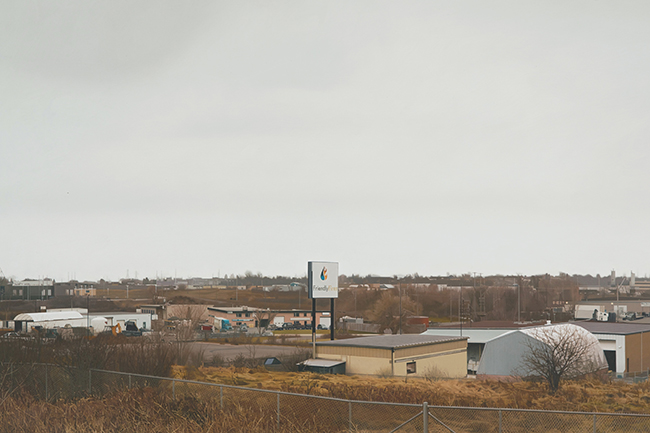 TrépanierBaer is honoured to introduce Mike Bayne along with long-time TrépanierBaer artist Geoffrey James in an exhibition titled Cruising Paradise. The exhibition will feature a selection of recent works by both artists.

The works on view are subtle and quiet testaments to Canadian urban and rural landscapes. These are ordinary scenes of corner-shops and house façades, cars parked in back yards in small towns, nondescript back alleys in big cities, abandoned shipyards, and temporary lakeside hawker’s installations.

The artists’ choice to depict these unremarkable scenes may appear contrary to a world that celebrates the ideal and the pristine, the iconic versus the unimportant – pitting the spectacular against the ordinary – but by re-presenting these everyday places, each artist, in his respective medium, confers a sense of significance to them, that lauds the aesthetic quintessence of locales.  The resonances between the two media used in these works is paramount: the colour and softness in passages of Geoffrey James’ photographs are reminiscent of paintings, while the preciseness of Mike Bayne’s paintings recall photographs.   Mike Bayne and Geoffrey James record a distinctive kind of paradise that is laden with familiarity, humanity, and the everyday, offering viewers a subtly critical, ironic, yet poetic view of the world.

Mike Bayne received an MFA from Concordia University (2004) and a BAH and BFA from Queen’s University (2001).  He has had numerous solo exhibitions over the past decade in Canada and the United States, most recently Pictures, Garrison Art Center, New York (2017); Deadpan, Katharine Mulheim Contemporary Art Projects, New York (2015); and Post, Structure, Sign, Katharine Mulheim Contemporary Art Projects, Toronto (2013), to name a few. He has participated in a number of group exhibitions in: Los Angeles, Chicago, New York, Vancouver, and Toronto. His work is in the collection of the National Gallery of Canada, the Art Gallery of Ontario, The Nerman Museum, The Jordan Schnitzler Museum of Art, the Wieland Collection and numerous prestigious private collections around the world. Mike is the recipient of the Kingston Prize for Portraiture, and had his work in a solo presentation at The Armory Show, 2012 in New York. He lives and works in Kingston, Ontario.

Geoffrey James was born in Wales in 1942, studied Modern History at Wad ham College, Oxford (BA and MA), and immigrated to Canada in 1966. A self-taught photographer, James is the author or subject of more than a dozen publications and is represented internationally in major collections. Noteworthy solo exhibitions include: Geoffrey James: Canadian Photographs, Stephen Bulger Gallery, Toronto (2017);  Geoffrey James: Inside Kingston Penitentiary 1835 – 2013, Glenbow Museum, Calgary (2015); Utopia/Dystopia: The Photographs of Geoffrey James at the National Gallery of Canada, Ottawa (2008); I Giardini Italiani at the Palazzo Braschi, Rome (1998); Running Fence, San Diego Museum of Contemporary Art, San Diego (1998), to name a few. He has participated in group shows at Documenta IX, Kassel; the Museum of Modern Art, New York; the Frankfurter Kunstverein, Frankfurt; and the San Francisco MOMA. Geoffrey James is a Guggenheim Fellow, recipient of the Gershon Iskowitz Prize (2002), and the Governor General’s Prize in Media and Visual Arts (2012). He lives and in Toronto, where he has been named the City’s first Photo Laureate.