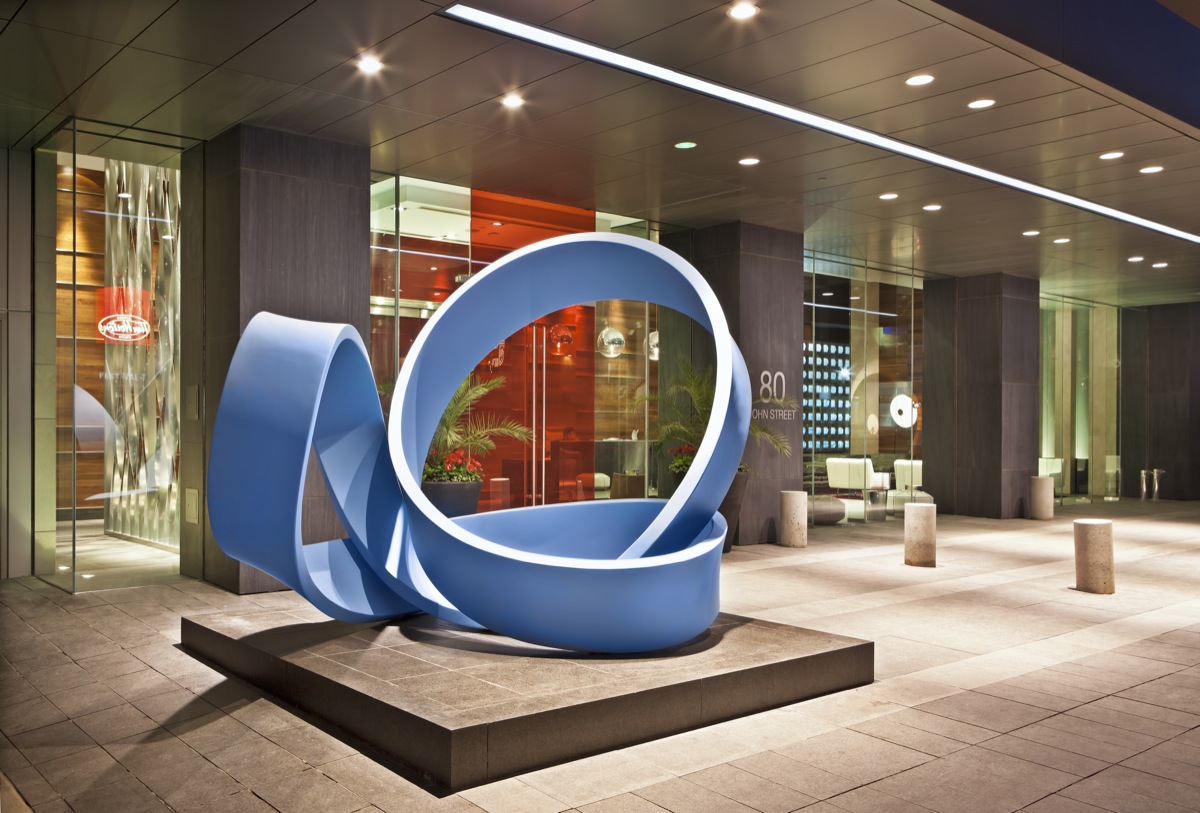 The 1,400 pound sculpture by internationally known Toronto artist James Carl, craftily titled Thing’s End, monumentalizes the humble blue rubber band, while its swirls provide both a diverting piece of art to contemplate, and a terrific frame to the human activity passing by, or indeed meeting, at this new landmark. While the predominant feel of piece is communicated through its relaxed stance, the work nevertheless suggests a little mischief with the tension suggested in its twists and turns, and it reminds the viewer of the tactile pleasures of snapping elastic bands.

The unveiling was emceed by Niall Haggart, Executive Vice-President of The Daniels Corporation, who introduced local City Councillor Adam Vaughan. While Haggart shepherded the work through its creation process on behalf of the developer, Vaughan has been instrumental in establishing John Street as an evolving cultural corridor for Toronto. Running south from Grange Park to Front Street through the Entertainment District, and finishing by the SkyDome and CN Tower at Bremner Boulevard as a pedestrian-only thoroughfare, the corridor features a growing number of significant attractions in the centre of the city. Thing’s End makes for an intervention of delight on an increasingly interesting street.

Haggart, left below, stands with Susan Michaels, James Carl, Agi Mandel, and Vaughan. Michaels and Mandel are sisters and members of the Reitman family whose donation of the land kick-started the TIFF Bell Lightbox/Festival Tower project several years ago.

Thing’s End invites photographers to play with angles the way that the two Absolute World towers do in Mississauga: constantly twisting lines present an infinite number of engaging vantage points for enjoying the work. One expects that it won’t be long before the sculpture features as a frame in countless portraits: picture your friends centre-stage amongst the twirls below and there is no doubt the piece’s beguiling curves will make it a star in its own right.