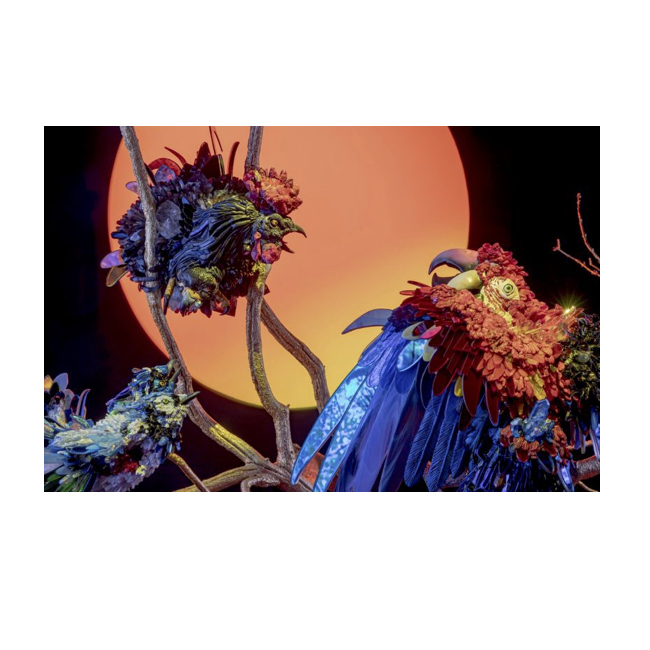 DaveandJenn: A Forest Song at the BMO Project Room

TrépanierBaer Gallery is pleased to announce DaveandJenn’s newest work titled A Forest Song, on view now at the BMO Project Room in Toronto, Ontario. Commissioned by the Bank of Montréal, this work has been over a year in the making.

As described by art critic and author Nancy Tousley:

Imagine you are walking in a dark wood and come upon a clearing where a miscellany of strangely exotic birds has assembled. A great three-headed macaw, resplendent in red and blue plumage, casts a wary eye at you over his shoulder. Another head, this one amused, watches a furious rooster scold a magpie who adorns himself, inserting “borrowed” feathers, including rooster’s tailfeathers, among his own. The third, golden head, growing out of the macaw’s other wing, plays with a dead snake he has just killed. Meanwhile, the green head of a two-headed blue and green jay screams at a peregrine falcon, hiding inside the rooster. The peregrine has gashed the blue jay’s side, leaving a large wound. Nearby, a cluster of puffy yellow songbirds gobbles up small butterflies…

The forest has long been an important theme for DaveandJenn, who began as painters, exploring the deep space of painting in works that grew to five inches thick. Admitting light, shadows and reflections into their piled-on images, their paintings became dense environments. A Forest Song brings aspects of painting and sculpture together with new media and technology to create “a painting you can walk into,” with larger-than-life birds.

A Forest Song is a fantastical avian tableaux that does double duty as an allegory for our times. Stunningly beautiful and disturbing all at once, this installation work is not to be missed….  If you are not in Toronto or its vicinity, you can preview the installation here.

Better known as DaveandJenn, David John Foy , born in 1982  in Edmonton, Alberta; and Jennifer Saleik, born in 1983 in Velbert, Germany, have been working together since 2004. They live and work in Calgary, Alberta. In 2006, they earned a joint BFA with Distinction from the Alberta College of Art + Design (now the Alberta University of the Arts). From the start, experimenting with form and materials has been an important aspect of their work, which includes painting, sculpture, installation, animation and digital video.

They have been shortlisted for the RBC’s Canadian Painting Competition (2006 and 2009), awarded the Lieutenant Governor of Alberta Biennial Emerging Artist Award (2010) and long-listed for the Sobey Art Award (2011).

DaveandJenn have participated in numerous solo and group exhibitions across North America.  Recent solo exhibitions include: A Forest Song, BMO Project Room, Toronto (2020); Whenever it Hurts, General Hardware Contemporary, Toronto (2019); Thinner Skin and Thicker Hide, Queen’s Square Gallery, Cambridge (2018); Paradise for an in-between time, Project Space, Esker Foundation, Calgary  (2018);  The Wellspring, Glenbow Museum (2017); A Natural History of Islands / daveandjenn,  Nickle Galleries at the University of Calgary (2016); No End (2015) at the Art Gallery of Alberta (2015); and This Sinking Feeling Could Keep You Afloat (2014) at TrépanierBaer Gallery. Recent group exhibitions include: How To Breathe Forever, Onsite Gallery, Toronto (2019); Transmundane, Dunlop Art Gallery, Regina (2017); in the Massachusetts Museum of Contemporary Arts traveling exhibition Oh, Canada (2014), that was shown in various venues across Canada in 2015;  and the Galerie de l’UQAM survey of contemporary Canadian painting Le Projet Peinture /The Painting Project (2013), to name a few.