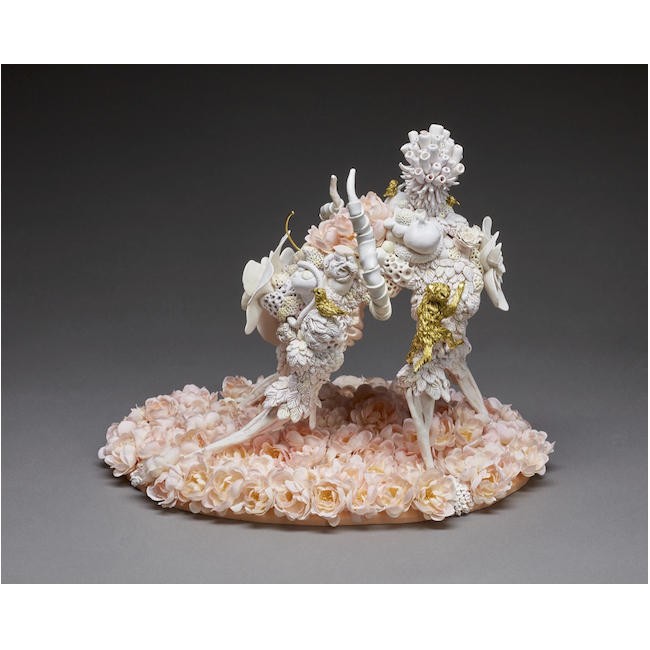 “We often focus on the shifting boundaries between the real and the imagined in everyday life and how these can distort our sense of ourselves, of others, and of the world around us. These distortions are so influential, but often we are completely unaware of them. Our biases, fears, hopes, and delusions run the show. There is also a sense that the centre won’t hold, that things will fall apart. That there is a reckoning looming. But then what? What comes after the delusions crumble, the forests fade and the lines are crossed? One thing ends, another begins. We are inextricably tied to the world around us, each person and thing, a landscape moving in between the micro and macro, sifting through the growing noise. Our work is the result of different landscapes being layered together. Our material choices often reflect this. Historical mediums like bronze and plaster being combined with plastic and resins. It’s an aggregate of a time and place. And science, history, daily life, western mythology, pop culture… it’s all in there. Because it’s all around us. We make art from noise.”   DaveandJenn

DaveandJenn (David Foy and Jennifer Saleik) have collaborated since 2004. Foy was born in Edmonton, Alberta in 1982; Saleik in Velbert, Germany, in 1983. They graduated with distinction from the Alberta College of Art + Design in 2006, making their first appearance as DaveandJenn in the graduating exhibition. Experimenting with form and materials is an important aspect of their work, which includes painting, sculpture, installation, animation and digital video. Over the years they have developed a method of painting dense, rich worlds in between multiple layers of resin, slowly building up their final image in a manner that is reminiscent of celluloid animation, collage and Victorian shadow boxes. DaveandJenn RBC Canadian Painting Competition finalists (2006, 2009), awarded the Lieutenant Governor of Alberta’s Biennial Emerging Artist Award (2010) and longlisted for the Sobey Art Award (2011). DaveandJenn’s work was included in the acclaimed Oh Canada  exhibition curated by Denise Markonish at MASS MoCA – the largest survey  of contemporary Canadian art ever produced outside of Canada. Their work can be found in both private and public collections throughout North America, including the Royal Bank of Canada, the Alberta Foundation for the Arts, the Calgary Municipal Collection and the Art Gallery of Hamilton. Recent solo exhibitions include Thinner Skin, Thinner Hide at Cambridge Art Galleries (2018), Paradise for an in-between time at the Esker Foundation (2018).

DaveandJenn’s solo exhibition will coincide with:
How to Breathe Forever group exhibition at Onsite Gallery OCAD U
Curated by Lisa Deanne Smith