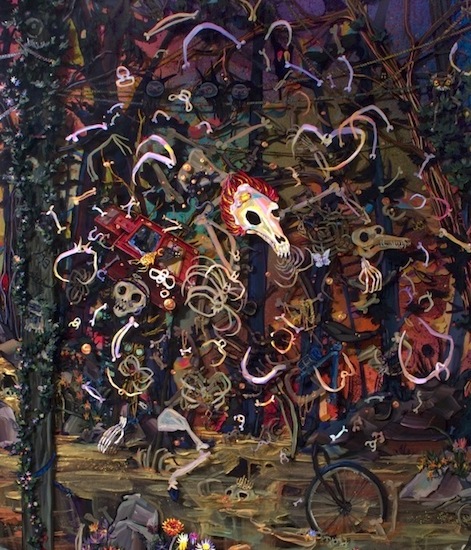 DaveandJenn:
This Sinking Feeling Could Keep You Afloat

TrépanierBaer cordially invites you to join us on Friday, December 5, 2014 for the opening of DaveandJenn: This Sinking Feeling Could Keep You Afloat. Anchoring this exhibition is a tableaux of three new stunning sculptures titled No End, -The Binding Line-, and Don’t Worry Mama, as well as new paintings and new collage works.

DaveandJenn work in tandem on resin surfaces that are meticulously layered on top of the other with a colour palette that ranges from traditional pigments to neon colours. Their sylvan scenes – replete with the requisite signifiers of flora and fauna – defy any sense of bucolic sentimentality by mixing preternatural creatures that frolic amongst the detritus of post-modern urban life. Many of the characters from these scenes have now manifested themselves as sculptures that compliment the painted surfaces.

With respect to this exhibition, DaveandJenn have remarked:

One of the recurring themes in this body of work is civilization and the acquisition of symbolic thought…and the constant cycle of order from chaos, and chaos from order…be it as far as empires are concerned or as it relates to one’s personal life or, in the case of the large tableaux of sculptures, how it plays out in the creative process.

Over the past couple of years our work has been increasingly preoccupied with fitting the intimacies of daily life, of inner life, within the larger scope of human history… The micro within the macro. And generally our practice has always been about the summation of many, sometimes very different, parts.

Artist duo David Foy and Jennifer Saleik, known as DaveandJenn, received their Bachelor of Fine Arts with Distinction from the Alberta College of Art + Design with a major in painting in 2006. Their work has been short-listed for the RBC Painting Competition twice: in 2006 and again in 2009. In 2010 DaveandJenn were the recipients of the Lieutenant Governor of Alberta Emerging Artist Award, and in 2011 they were long-listed for the Sobey Art Award.

In 2012, works by DaveandJenn were included in Oh, Canada at MASS MoCA. Curated by Denise Markonish, this exhibition was the largest survey of contemporary Canadian art outside of Canada. The following year they were selected for inclusion in The News From Here: The 2013 Alberta Biennial of Contemporary Art, curated by Nancy Tousley. From March to June of 2015, DaveandJenn will be the subject of a solo exhibition at the Art Gallery of Alberta titled No End.  Their work has been featured in art fairs in Canada and the United States, and can be found in collections across North America.