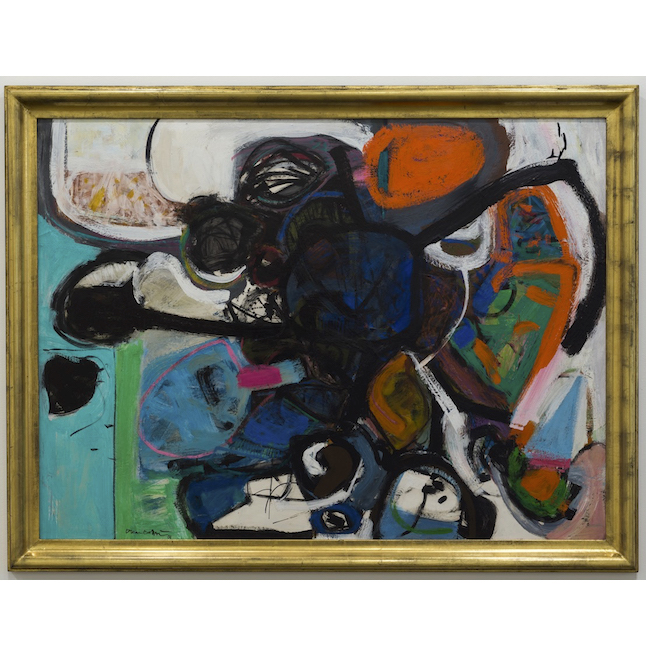 Finally, after 2 postponements due to COVID-19, Discovering Oscar Cahén: The Warrior a collaborative exhibition between TrépanierBaer and Feheley Fine Arts, will open at Centre Space at Feheley Fine Arts in Toronto in November 2021.  Although the exhibition is anchored by the seminal painting titled The Warrior (1956), other paintings will be presented in the show, including the dramatic, rich, and colourful painting titled Traumoeba (1956).

Traumoeba (1956) is a radiant tour-de-force painting made during the last year of Cahén’s life. Its porte-manteau title is an amalgamation of the word trauma, the German word traum (dream), and the word amoeba, a unicellular organism that has the ability to alter its shape, primarily by extending and retracting. Traumoeba made its first public appearance  in June of 1956 as part of a circulating exhibition sponsored by the Smithsonian Institution titled Canadian Abstract Paintings. Along with other works by Oscar Cahén, it travelled in the United States for the next two years, and was then shown to Canadian audiences in 1959 at the Art Gallery of Toronto in the Oscar Cahén Memorial Exhibition.

Traumoeba is a jewel-toned kaleidoscopic presentation of Cahén’s bold gestures and vibrating colour combinations in taut, compartmentalized, carefully balanced compositions. In post-war times, abstraction allowed for a different processing of emotion via colour, rhythm and shapes, and Cahén – who had been an unwilling refugee during World War II – availed himself of this genre and its infinite potential.

We look forward to seeing you at Centre Space for this long-awaited exhibition!

Born in 1916 to a Jewish-German family, Oscar Cahén’s life was soon to be riddled with traumatic experiences. In 1933, at the onset of the Second World War, the Cahéns were robbed of their German citizenship and forced to flee. Cahén’s father, Fritz Max Cahén, was targeted as one of the leaders of an anti-Nazi resistance group, causing further anxiety to the family as they were always on the run. By 1935, Cahén was selling his drawings, cartoons, and graphic designs to help support his family financially. As a refugee, Cahén sought out work in places like Prague and Britain but was forced to leave each as he was suspected of being a German spy. Along with over two thousand other German-Jews, Cahén was captured in May 1940 and brought to Sherbrooke, Québec where he was interned at Camp N as a prisoner of war. He would stay there for two long years. During that time, Cahén drew often and effortlessly charmed his fellow internees with his “Berliner” wit. Until finally arriving in Toronto, Canada in 1944, Cahén had been perpetually haunted by a life of conflict and uncertainty.

Around 1948, Cahén and other Canadian painters such as Jack Bush and Harold Town drew inspiration from the New York School and began experimenting with the gestural strokes and emotive colours typical of American post-war Abstract Expressionism. The proliferation of works by artists including Kazuo Nakamura and Jock Macdonald, and other members of what would from then on be known as Painters Eleven demonstrated to Canada’s relevance as a site of cultural sophistication and worldliness.