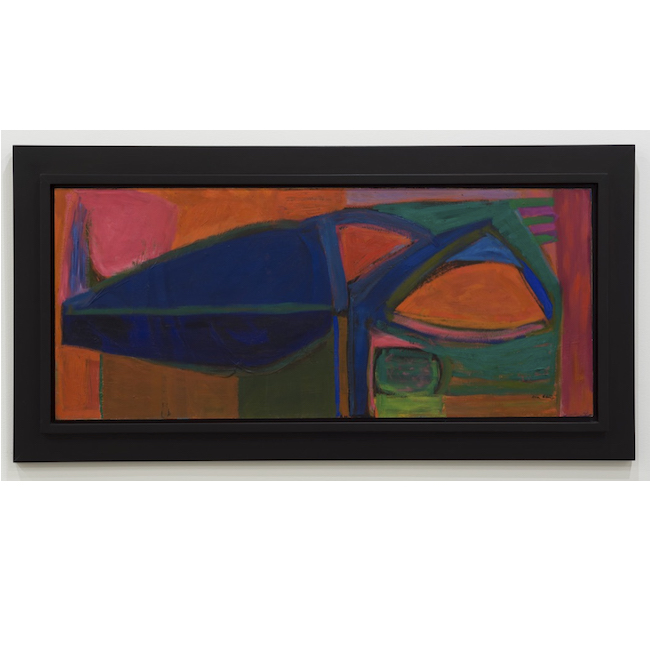 The response to Discovering Oscar Cahén  has been amazing: audiences have marvelled  at  the breadth and scope of the works on view by  this esteemed multidisciplinary artist and founding member of Painters Eleven.  Cahén was described as using colour  like a battering ram; one example is the strikingly elegant painting titled Still Life, FAO 203, 1953. As noted:

Still Life is a fine example of Cahén’s early mature work in which he has fully absorbed his European influences: Cubism, German expressionism, surrealism and British artists such as Graham Sutherland, Ben Nicholson and Alan Davie.  Still Life is a quintessential example of one pole of Cahén’s art marked by the density of his imagery and his very personal colour: combination of dark yet intense pinks, blues and reds such as no other member of Painters Eleven used.

Whereas prior to this work Cahén’s paint surfaces were sometimes so thick as to preclude any transparency, in this distinctive painting there is some layering of colour that helps to open up the surface and enable it to breathe.

The title reminds us of the working method sometimes used by other members of Painters eleven such as Jack Bush, Alexandra Luke, Harold Town and by Cahén’s himself: the “image bank procedure,” whereby something seen in the perceptual world of the artist is used as the starting point for an abstract painting.

Bush, for instance, could use the Italian flag, the patterning of a dress seen in a window, the view out from the inside of a tent, and so on, retaining only the faintest traces of such imagery in the finished work. Cahén’s based the painting Austin Healey 100 Engine (1955 or before) on the motor of sportscar, and his Animated Items (1955 or before) stems from the interior of a room.

Cahén’s Still Life may have begun from his contemplative appreciation of a lovely flat table top spread with oval bowls and fruits, but the beauty of the work is entirely its own, with various shapes, all in the same family, ranged across the surface in harmony. As Cahén has said in his notebooks, he did not want to do works of mere “reportage” and so he called his paintings “arrangements” and “harmonies.”