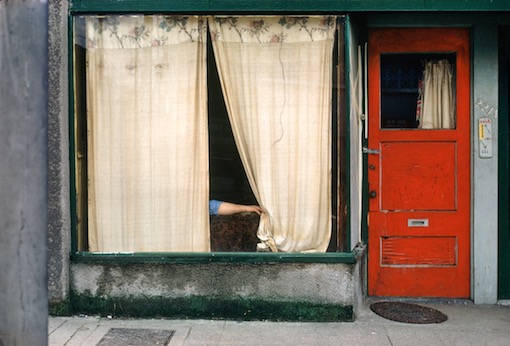 Don’t Take My Kodachrome Away – A Review of Fred Herzog: Modern Color

One of the things that strikes a viewer almost immediately when presented with an array of Fred Herzog’s photographs is the pop of “Kodachrome red” that appears in almost every image. Whether in the tights of a young girl and the nearby skirt of an older woman in Red Stockings (1961), or in the signage of Empty Barber Shop (1966), or in a painted billboard for Buckingham cigarettes in Elysium Cleaners (1958), Herzog includes the hue in the large majority of his photographs. “Kodachrome red, available only in slides, was his muse,” writer and critic Sarah Milroy has said, “and many of his best works are anchored in this primary hue.”

In the new book, Fred Herzog: Modern Color, the photographer’s masterful use of colour is on full display. A quintessential mid-20th-century street photographer, Herzog captures daylit streets crammed with shop signs and people. At night, the neon lights of a gloriously gaudy Vancouver float in the darkness like fireflies in pitch. Open lots with wrecked and decaying automobiles sit cheek by jowl with down-at-heel businesses on forgotten street corners. Industrial sites acquire strange beauty in their very ugliness — informed by the knowledge that they, too, are relics of an age before towering skyscrapers and condo canyons.

To read the entire article, please open the PDF listed below or please click here.