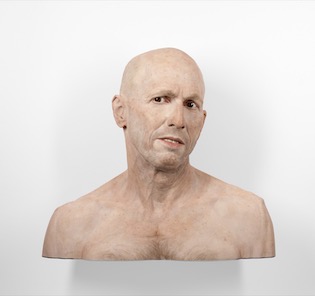 Double Take: Evan Penny & John Hall
On View at TrépanierBaer through to February 14, 2018

IN THE VIEWING ROOM

Two of Calgary’s most renowned contemporary realist artists, both graduates of Alberta College of Art, albeit a decade apart, Hall and Penny have been friends and colleagues since the late 1970’s.  During the 1980’s both artists were, in Hall’s words: “attempting to breathe new life into the tradition of realist art”. Both artists did exactly that and continue to do so in their practices, each with unique approaches in their respective mediums.

While both works suggest a portrait of Evan Penny, the former in a sculptural format and the latter as a painted format, the scale adjustment of  Self-Portrait, Variation #3 and the layering of frame components on the front of the canvas of Framed:Phoenix 1 : “…make it less easy for viewers to assume that they are looking at something other than art…” ( John Hall). Both artists have explicitly re-presented portraits of Evan Penny with their respective improvisations of these genres.

Complimenting these works is a stunning black and white photograph by Evan Penny titled Camille. Its degrees of provenance are two fold: it is a photograph of a sculpture of the performance artist Camille Turner. But at first glance, one could think it is a photograph of that person. The conceit is suggested by both the verisimilitude of the sculpture itself, along with the black and white colour scheme of the photograph that minimizes the representation of the silicone, pigment and other media used for the production of the sculpture.

This grouping of exquisite works is not to be missed! On view until February 14, 2018.

A PDF version of this announcement is available below.