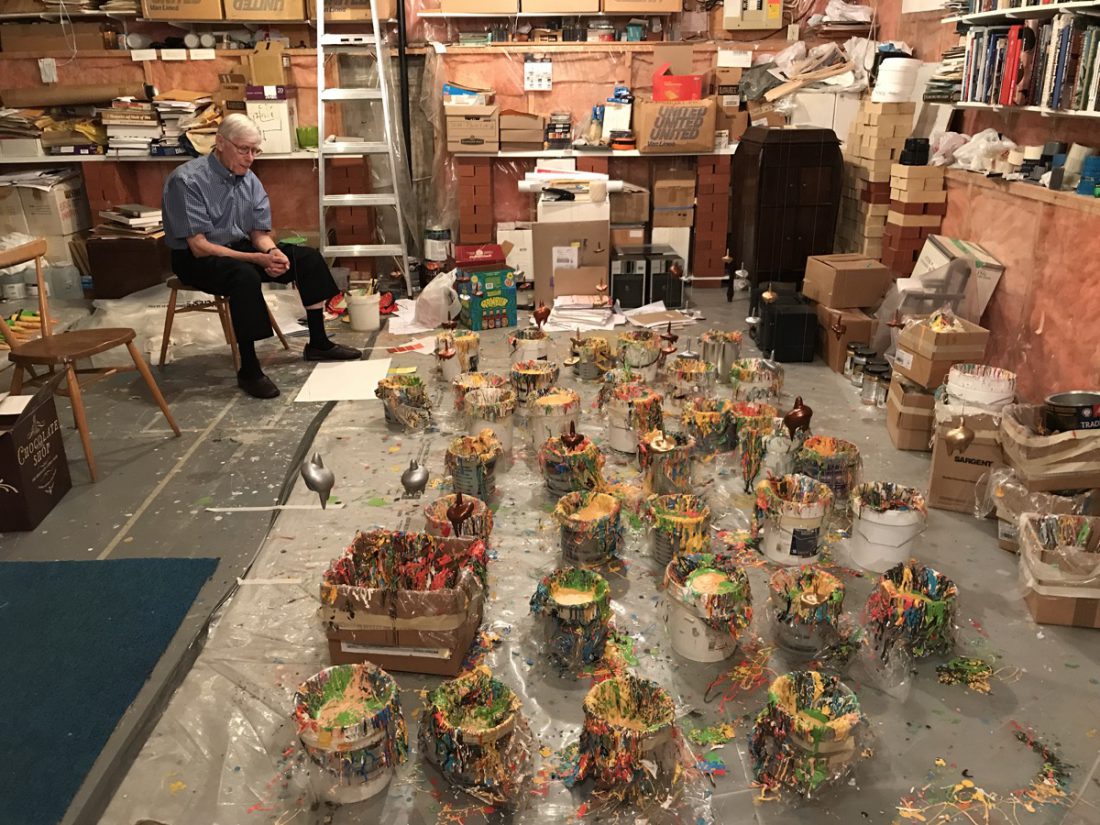 TrépanierBaer is pleased to present Eric Cameron: Thanatos, an exhibition featuring the artist’s most recent Dipped Paintings from his Thanatos Series begun in 2009, as well as a selection of early works including: several important Sellotape Paintings;  works from the Process Paintings; and central to the exhibition is the monumental Thick Painting titled Lettuce begun in 1979.

Eric Cameron: “The first Dipped Paintings were made, over a period of several years as a less labour-intensive alternative to my laboriously brushed out Thick Paintings…Over the years, I found myself taking the results ever more seriously, ever more intrigued by the forms and surface textures that presented themselves, until the response of some Remembrance day poppies that I must have acquired round November 11, 2009 claimed a place for them alongside the major projects of my career.

By that time, the process of dipping had been refined beyond the preliminary ventures with objects tied onto string or coloured cords. I would begin by sewing the ends of 100 yard spools of fish wire onto the plastic flower part of the poppies, further secure the fish wire to the needles with duct tape, and suspend the whole thing from the exposed beams in my basement studio and proceed to dip each poppy into cans of brightly coloured Expressions latex paint or into one of the cans of pure white gesso left over from my Thick Paintings project.

The title Thanatos (Death) for my works of my mid-seventies (early eighties) implies not so much a death wish as an acceptance of – and reconciliation to – the inevitable end of life.  For me the highest aspiration of art has long been to help reconcile us to the imponderability of the great imponderables that circumscribe our existence, including the most imponderable of all, ourselves.”

In 2011 Dr. Ann Davis, in her introduction to the book Cover and Uncover: Eric Cameron, stated the following:

Camerons’s oeuvre seeks to eliminate the distinction between art and life. His immense contribution not merely consists of the act of painting objects, but more importantly, includes concomitant analysis, which has led him to embrace and reveal the mysteries of life. Well-known in Canada, and now gaining increasing attention internationally, Cameron in one of Canada’s great artists. His early work, his perceptive writings, his videos and Thick Paintings – very tangible objects, or more accurately objects made into new objects – demonstrate his extraordinary creativity, persistence, and sensitive analysis.

Eric Cameron is the recipient of numerous prestigious awards including: the 2004 Governor General’s Award and the 1994 Gershon Iskowitz Prize. He has exhibited extensively both nationally and internationally. In 2009, the Canadian Cultural Centre in Paris presented a solo exhibition titled Record of Work. Curated by Catherine Bédard, the show featured his Thick Paintings and was accompanied by a catalogue. In 2016 and 2017 Camerons’s work was included in I have been thinking about forever curated by Barbara Fischer, for the Jackman Humanities Institute at the University of Toronto; and Voices: artists on art, curated by Yvonne Lammerich and Ian Carr-Harris at the Southern Alberta Art Gallery in Lethbridge, Alberta. Eric Cameron’s work can be found in public collections including: the National Gallery of Canada, Glenbow Museum, the Art Gallery of Ontario, the Musée d’art contemporain de Montréal, and the Centre national des arts plastiques, Paris, France, to name a few, as well as in numerous important private collections in Canada.

Eric Cameron lives and works in Calgary, Alberta. Born in 1935 in Leicester, England, Cameron received his B.A. in painting from King’s College, Durham University in Newcastle and his Diploma in Art History from the Courtauld Institute at the University of London. He is currently a Professor of Art at the University of Calgary.