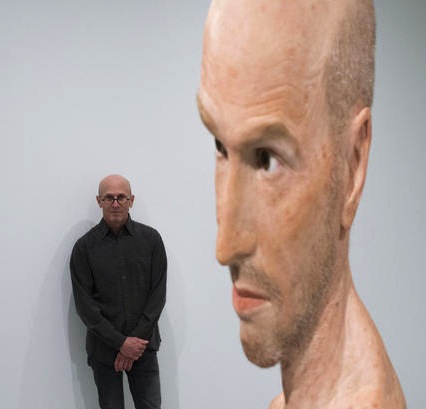 Evan Penny: Re Figured at the AGO

Double-takes abound at Evan Penny: Re Figured, just opened at the Art Gallery of Ontario.

Penny, a Toronto-based artist, has been making wondrous, hyper-real sculptures of the human form for more than 30 years. Along the way, he’s gained international acclaim for his skill in recreating, with exacting detail, the textures, forms and gestures of the human body. Certainly, it can take a few looks to be sure there aren’t actual people lurking in his silicone-and-human-hair creations.

Also worthy of a double-take, however, given Penny’s aesthetic, technical and critical success, is the fact that Re Figured is only the first AGO solo show for this masterful local.

Re Figured was actually developed by German curator Daniel J. Schreiber, who premiered it at the Kunsthalle Tubingen in June 2011, then toured it to Austria’s Museum der Moderne Salzburg and Italy’s Museo delle Arti Cantanzaro before its final stop here.

Yet Penny, who turns 60 next year, is gracious about his hometown gallery having taken a while to honour his achievements.

“Probably all artists would say it [the recognition] always comes too late, right?” he says, smiling. “But I think, in fact, this is kind of perfect timing.”

The wait, Penny explains, permits Re Figured to recap a recent, decade-long period of exploring how photography and digital imaging affect our sense of ourselves.

“Young Self and Old Self,” finished in 2011, round off this body of work. Viewing these self-portrait sculptures, it’s as if a computer-aging program has been executed in meticulous, zoomed-in 3-D. The pair is also the subject of black-and-white prints titled “Portrait of the Artist as He Was (Not)” and “Portrait of the Artist as He Will (Not) Be.”

“I try and situate my work somewhere between the way we see or perceive ourselves in real time and space and the way perceive our selves in an image.” Penny explains.

Certainly Penny’s work is effective on this front, with his squeezing, cropping and stretching of realist figures forcing an acute awareness of the ways photography compresses or compromises real-life depth and wholeness.

Yet for some viewers, Penny’s work may be most powerful in confronting the human aging process. Call it the foot-long smile-line effect — or blame it on the fact that Penny has used some of the same models over the years. Any way you slice it, his oeuvre highlights how eras are etched on the body.

“The young and the old self-portrait project is all about that that kind of reflection [on aging],” Penny says. “It really struck me once I had [Old Self] built, how much more I imagined myself older.”

“I think that’s kind of to the point that once we have images, we identify with them. Because this image exists, now I am older,” he laughs, his own (non-silicone) smile lines deepening.

Though Penny’s works prompt us to consider hard truths, they also have great popular appeal, provoking smiles and wondrous stares rather than the crossed arms and skeptical scowls more typical of the white cube.

This mass appeal can, Penny admits, be “a double-edged sword” when it comes to gaining the respect of the exclusivity-trusting art establishment. But he remains steadfast.

“I think one of the highest compliments you can be given as an artist is when people encounter your work and find themselves in a heightened or unexpected kind of relationship,” he says. “I also think that the naïve relationship — when people approach [the work] without prejudice and are just enthralled — that’s what one should trust as much as anything else.”

So what’s next for Penny? It’s difficult for an outsider to guess, given how his sculptures seem so perfectly executed, with little room visible for improvement.

“It’s hard to say” what lies ahead, Penny agrees. For any point in his production, he concludes, “You could have asked the exact same question: Where can you go from here?”

“My sculpture instructor asked me that 30 years ago.”