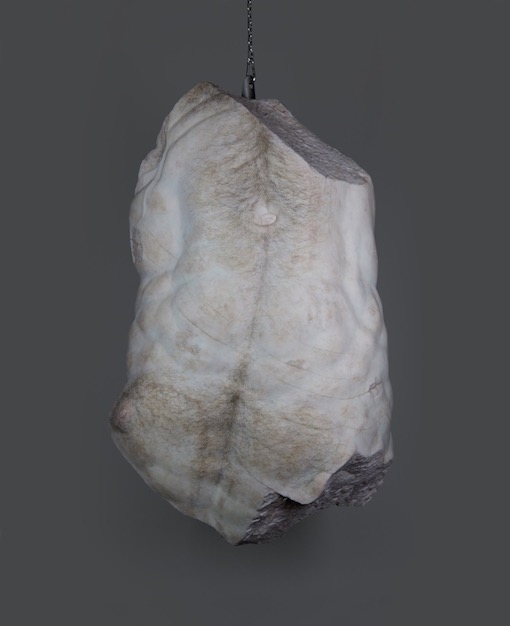 When last we spoke about what I’ve been calling “figuration ” – the aesthetic drive towards representing the living, breathing organisms that populate this here planet (even if only in our fevered imaginations – I’d introduced work that tended towards the smaller scale, towards sculptures that referenced figurines, addressing issues raised by such mass-produced items of collectible nostalgia, like Hummel or Royal Doulton figurines, or the even smaller stuff that once came with the tea bags we purchased….

Meet Kathy Venter and Evan Penny, both Canadian artists…..Like Venter, Evan Penny (www.evanpenny.com) is also South African by birth, now a Canadian citizen. He’s been exhibiting since the late 1970s, and has shown in North America, Europe, and Asia. I’ve fibbed a bit in contextualizing him within the limitations of 1:1 scale. Penny’s work comes close, and yet at the same time doesn’t. But it does engage hyper-realism in a very big way. I first saw his work in 1984, a piece entitled Ali. It’s the figure of a nude standing woman, seemingly casually resting her weight on one foot and staring off into the distance. It was a disconcerting work to see. Critic Gary Michael Dault called it “over-real,” and that absolutely sums it up. Not quite a full-size reproduction of its subject (it was based on a clay original from which Penny pulled a mold), its absolute exactitude, its excruciating fidelity, seemed to extend far beyond representation of the real. I recall feeling a headache coming on as I looked at it, overwhelmed by what it was aesthetically proffering. Intense.

To read the entire article, please open the file listed below.