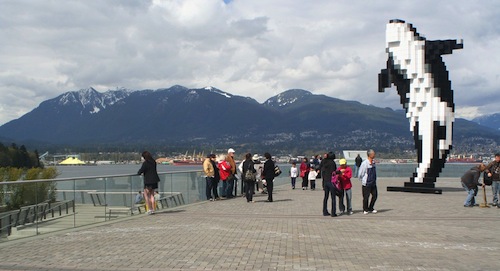 An exhibition billed as the first survey of Douglas Coupland’s visual art has been announced to take place at the Vancouver Art Gallery from May 31 to September 1, 2014. The exhibition, titled “Douglas Coupland: everywhere is anywhere is anything is everything,” will include new works by the artist and will be accompanied by the first major publication on his visual art.

“I think that Doug has been producing a lot of really outstanding works in the last decade and more,” says Vancouver Art Gallery chief curator Daina Augaitis, who is leading the project. “And there hasn’t been a museum assessment of it, so it seemed like it was time for us to step in and do that kind of assessment.”

Coupland is already contributing blog posts about the development of the show to couplandexhibition.org, touted as a “real-time online magazine” about the exhibition. One recent post suggests one work for the upcoming show, Crack Den Millionaires, will be manifested in Lego and inspired by the Vancouver real-estate blog Crack Shack or Mansion?

Augaitis says the show website reflects Coupland’s tendency to be “keen to be sharing his side on the development of the exhibition” and also reflects his interest in social media and “crowdsourcing as a means of developing his artworks.” She says that the Lego clubs Coupland is reaching out to is one instance of this, and that the show will have “different ways to engage the public beyond the physical space” of the gallery.

The exhibition will have five thematic sections, including Canada Noir, which will address Canadian cultural identity in paintings, large-scale sculptural installations and building models; and Words into Objects, which investigates Coupland’s relationship with text and literature.

“I think this exhibition offers a lot of possibilities to think about Doug not just as a an artist, but as a writer and a designer and to see how it all coalesces around his active investigation of what the 21st-century condition is all about,” Augaitis says.

Douglas Coupland was born in 1961 and grew up in West Vancouver, where he continues to live and work. He attended the Emily Carr Institute of Art and Design in the early 1980s, where he was VP of the student society and regarded as part of a group of five artists including Angela Grossmann, Attila Richard Lukacs, Derek Root and Graham Gillmore, who went on to be known in part as the “Young Romantics” thanks to a Vancouver Art Gallery exhibition of the same name.

In 1991, Coupland’s book Generation X: Tales for an Accelerated Culture made the national and international bestseller lists, and 22 other books followed, including the studies of Canadian culture Souvenir of Canada, Souvenir of Canada 2 and Terry (about Terry Fox).

Though his visual art won increasing profile following the publication of his books, Coupland has exhibited his artwork nationally and internationally since the 1980s. He has also created several public artworks in Canada, including a Terry Fox Miracle Mile running/walking track and other works at Toronto’s Canoe Landing Park and a pixellated orca on the Vancouver waterfront. This summer, he also has a two-part exhibition on at Daniel Faria Gallery in Toronto.