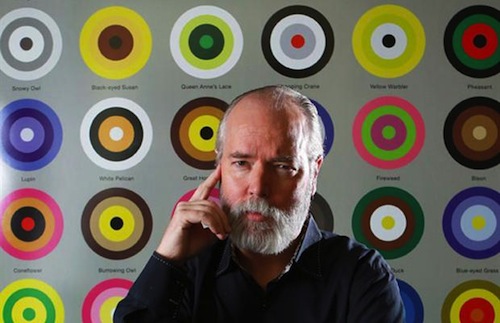 Famed Canadian author and artist Douglas Coupland has been commissioned to create a mural in the lobby of the new MARK condo development in Calgary’s beltline. The piece, which will be completed in the fall of 2015 when the building is finished, is Coupland’s first large-scale work in Alberta. Interpretation of Calgary, Alberta in the 21st Century uses a target motif and bright colours to represent Calgary’s flora, fauna and institutions.

Image Credit:
Author and artist Douglas Coupland sits in front of a scaled down mural which will be very similar
to the one he has been commissioned to complete for the MARK condo project in Calgary’s beltline.
Photograph by: Gavin Young, Calgary Herald