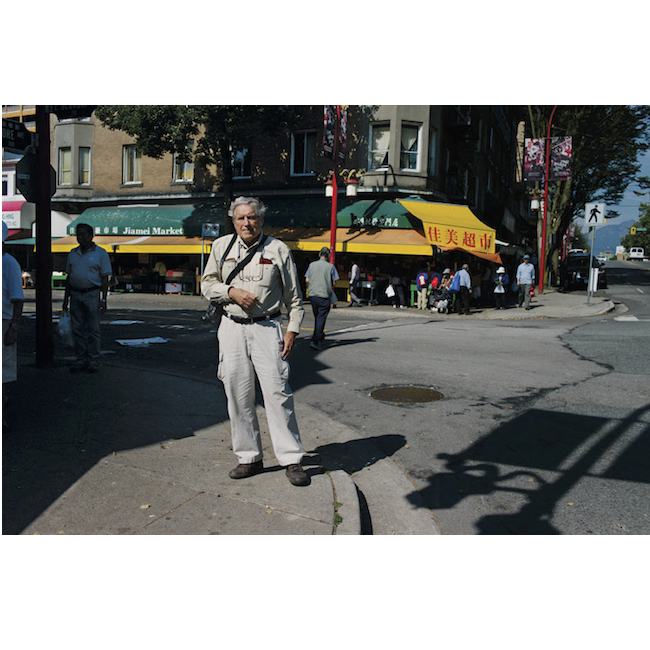 It is with sorrow that TrépanierBaer conveys the death of Fred Herzog, who passed away September 9th, 2019 in Vancouver at the age of 88. Predeceased by his wife Christel who passed away in 2013, he is survived by his daughter Ariane and son Tyson.

Born in 1930, Fred Herzog immigrated to Canada from Germany in 1952. He had become interested in photography as a young man in Germany, and shortly after he arrived in Vancouver, Herzog began taking photographs in downtown streets and working class neighbourhoods.

His images of eclectic second-hand shops, and inexpensive cafés rich with the histories of their proprietors and clients, vibrant neon signs and billboards, all add colour and texture to city streetscapes.

Herzog made his colour images on Kodachrome, a slide film with excellent sharpness and a long tonal range that could be reproduced in prints. He thought of ways of making photographs that might draw upon the realism that valued detail and objective description, to depict urban space as kind of theatre, a site of social interaction and exchange, rather  than simply a collection of buildings. Herzog regularly photographed Vancouver on the meandering walks he took after work and on weekends, which carried him through the downtown, along Robson, Hastings, Dunsmir or Pender streets to Chinatown…Herzog’s photographs invoke the gaze of the flâneur, the restive observer of capitalism’s impact on culture, and in the tradition of the flâneur, Herzog, positioned himself as a narrator oustide the depicted action, a figure of whom only the viewer/reader is aware. His views of Vancouver’s downtown streets, their evening crowds energized by the vibrant electricity of neon light, carry the viewer through public space as an empathetic part of the crowd.

Fred Herzog’s first major retrospective, Fred Herzog: Vancouver Photographs, was held at the Vancouver Art Gallery in 2007. Subsequent major exhibitions include Fred Herzog: Photographs, C/O Berlin, Germany (2010), Fred Herzog: A Retrospective, Equinox Gallery, Vancouver (2012), Eyes Wide Open! 100 Years of Leica Photography, Haus der Photographie, Hamburg, Germany (2015) and Photography in Canada, 1960-2000, National Gallery of Canada, Ottawa (2017). In 2010 Herzog received a Honourary Doctorate from Emily Carr University of Art + Design, and in 2014 he received the Audain Award for Lifetime Achievement in the Visual Arts. A profile on the artist was featured on the Knowledge Network for the series Snapshot: The Art of Photography II in 2011. In 2014, Fred Herzog’s photograph Bogner’s Grocery (1960) was released as a limited edition stamp as part of Canada Post’s Canadian Photography series.

Fred Herzog was a great artist and will be missed. TrépanierBaer extends its sincere condolences to his family and to his friends.

A PDF of this announcement is listed below.