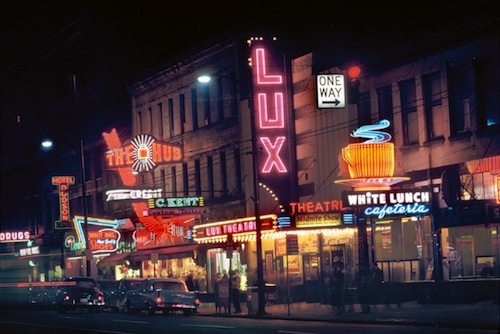 Fred Herzog grew up poor in wartime Germany before emigrating to Canada in the early 1950s, and to Vancouver in 1953. His images of Vancouver streetlife, shot using Kodachrome colour slide film, provide a visual history of that city’s transition during the 1950s, ’60s and ‘’70s. They’re stunning to look at now, almost the visual equivalent of the poems of Charles Bukowski and Al Purdy, but for years, according to Governor-General Award winning former Herald art critic Nancy Tousley, Herzog rarely even made prints of his work. He didn’t really break out as an art star until 2007, when the Vancouver Art Gallery and Equinox Gallery in Vancouver held simultaneous exhibitions of his photos — at the age of 77.

Now, two prominent shows of Herzog’s work give Calgary audiences a chance to experience Herzog’s work up close and personal. Fred Herzog: Street Photography is up and running at the Glenbow, while a second exhibition, featuring 32 photos, opens Saturday afternoon at Trepanier-Baer Gallery.

“Fred Herzog’s photos are a revelation,” says Glenbow’s Interim CEO and President Donna Livingstone. “They show us that there are myriad stories to be discovered in everyday urban environments, stories that can only be revealed through an artist’s eye.

“Herzog walked the arteries of inner-city Vancouver and he captured the very pulse of that place and time. Fifty years later, his work is inspiring all of us, including new photographers, to pay attention and be inspired by our built environments and the colourful human figures who populate them.”