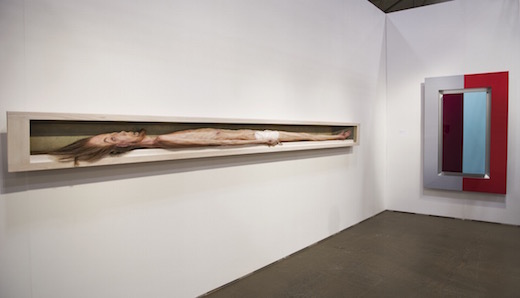 TrépanierBaer is delighted to open its Winter 2016 Season with Haunting Holbein, an exhibition featuring new work by Evan Penny, and by Christian Eckart, including important early works by Vikky Alexander.

Don’t miss out on this opportunity to see 21st-century works of art that look back 500 years and revisit questions of belief, mortality and transcendence.

***
Evan Penny is a conceptually-based figurative sculptor and photographer living and working in Toronto, Ontario. Born in South Africa in 1953, Penny immigrated to Canada in 1964. He completed his BA with Honours in 1975 and his MFA in Sculpture in 1978, both at Alberta College of Art + Design.

Evan Penny has had numerous solo exhibitions around the world, including the Tomio Koyama Gallery, Tokyo; the Columbus Museum of Art, Ohio; the 49th Parallel, New York; and Galeria Sergovia, Spain, to name a few.  Penny’s work was the subject of a lauded solo exhibition titled Evan Penny: Re Figured. Curated by Daniel J. Schreiber of Germany’s Kunsthalle Tübingen, this large-scale survey exhibition included over 30 works, including larger-than-life sculptures and photographs. It was shown at European venues such as the Kunsthalle Tübingen, Germany (2011); the Museum der Moderne Salzburg, Austria (2012); and MARCA, Catanzaro, Italy (2012); and concluded its run at the Art Gallery of Ontario, Toronto, Canada (2012/2013). A comprehensive multilingual catalogue accompanied the exhibition. Evan Penny’s work will be included in RESHAPED REALITY: 50 Years of Hyperrealist Sculpture at the Museo de Bellas Artes de Bilbao, Spain in the summer of 2016, and at MARCO, Monterrey, Mexico in the fall of 2016.

Christian Eckart is an abstract painter and sculptor. Born in Calgary, Canada in 1959, he lives and works in Houston, Texas. He graduated from the Alberta College of Art + Design in 1984, and completed his MFA from Hunter College, CUNY, New York in 1986. Since graduating, Eckart has participated in over 200 hundred solo and group exhibitions worldwide.

Christian Eckart has won and successfully completed numerous large-scale projects within the past decade. Two of note are a sculpture/mobile consisting of three large scale mirror polished stainless steel rings for an atrium at 805 – 3rd Avenue in Manhattan, New York for the Cohen Brothers Reality Group; and a wall-mounted triptych titled Hatrick made of 1,500 hand-made components installed in Calgary’s Centennial Place in 2013. Eckart recently unveiled a new wall-mounted commission for the William P. Hobby Airport in Houston, Texas.

Christian Eckart’s work is represented in many important private and public permanent collections including those of the Guggenheim Museum, N.Y.; the Museum of Modern Art, N.Y.; the New York Public Library; the Chicago Art Institute; the Detroit Institute of Art; the Museum of Fine Art, Houston, Texas; the Art Gallery of Ontario, Toronto; Museum Moderner Kunst, Vienna, Austria; the Musée d’Art Contemporain, Grenoble, France; the Australian National Gallery; the SCHAUWERK in Sindelfingen, Germany; and the Eli Broad and Eli Broad Family Foundations, Santa Monica, California as well as many others throughout North America, Europe and Asia.

Alexander has had solo exhibitions and installations at TrépanierBaer Gallery, Calgary; Wilding Cran Gallery, Los Angeles; The Apartment, Vancouver; Art Gallery of Windsor; Kunsthalle Bern, Switzerland; and at the Contemporary Art Gallery, Vancouver; and Houses of Glass, The Engine Room Gallery, Massey University, Wellington, New Zealand. She has been included in group exhibitions such as The Experience of Landscape, Whitney Museum of American Art; Toward a History of the Found Object, Mendel Art Gallery, Saskatoon; in Interdidal: Vancouver Art and Artists at the Antwerp Museum of Contemporary Art where she exhibited four large format (40” x 60”) colour photographs from the Model Suite Series; and in the National Gallery of Canada’s Biennial of Contemporary Canadian Art titled Builders.

Alexander’s work is included in many prestigious collections including the Museum of Contemporary Art, Los Angeles; the National Gallery of Canada; the Canada Council; the Deste Foundation, Athens, Greece; and the Vancouver Art Gallery, to name a few.