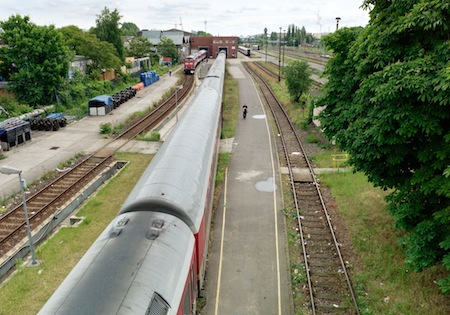 In the Viewing Room
Geoffrey James: In Colour

Please join TrépanierBaer for the opening of Geoffrey James: In Colour, an exhibition of new works. On view from September 8 through to September 29, 2012.

In 2008 Geoffrey James was celebrated with a major survey of his work at the National Gallery of Canada. Titled Utopia/Dystopia, this stunningly beautiful exhibition featured eighty-seven works. In a promotional piece for the exhibition posted on the National Gallery’s website, James was described as:  “…a picture maker who invests in the raw materials of light, paper and chemicals with the power to recall things.” All true, at the time.

Today, James continues to invest in the raw materials of light and paper, and with the power to recall things, however, without the chemicals. James now works using a digital camera and in colour. Over the past several years he has taken hundreds of pictures of various regions of Canada, the United States, Europe and Cuba, and has mastered the digital process which, as he says: “...is remarkably liberating.”  With this new body of work James continues to make pictures that reveal: “…the slightly schizoid nature of our man-made landscape.”

Geoffrey James lives and works in Toronto, Canada. Born in St. Asaph, Wales, he studied Modern History at Wellington College and Oxford University before immigrating to Canada.  Active as an artist since 1970, James is well known for his photographs of parks and gardens as well as his photographic essays embracing the picturesque as it relates to the European photographic tradition. His fascination with the bucolic and utopian landscape in particular has informed his creative oeuvre.

He is the recipient of numerous grants and awards including the Victor Lynch Staunton Prize of the Canada Council and the Roloff Beny Foundation Book Award. He is a Fellow of the Graham Foundation for Advanced Studies in the Fine Arts, Chicago, and the John Simon Guggenheim Foundation, New York. In 2002, he was awarded the Gershon Iskowitz Prize. In May of 2012, James was honoured with a Governor General of Canada Award in Visual and Media Arts.

James has exhibited his work widely throughout Canada and abroad. Some exhibitions of note include Running Fence, 1998 at the San Francisco Museum of Contemporary Art; Paris at the Canadian Cultural Center in Paris in 2001; and Viewing Olmsted with Robert Burley and Lee Friedlander organized by the Canadian Center for Architecture, Montréal in 1996, to name a few. James’ work can be found in the collections of the Musée des Beaux-Arts and the Musée d’art contemporain in Montréal; the Art Gallery of Ontario, Toronto; the National Gallery of Canada, Ottawa; The Museum of Modern Art, New York; the Bibliothèque nationale de France, Paris; the Palazzo Braschi, Rome and the Musée de l’Elysée, Lausanne, and the San Francisco Museum of Contemporary Art, San Francisco.

TrépanierBaer has represented Geoffrey James since 1992.