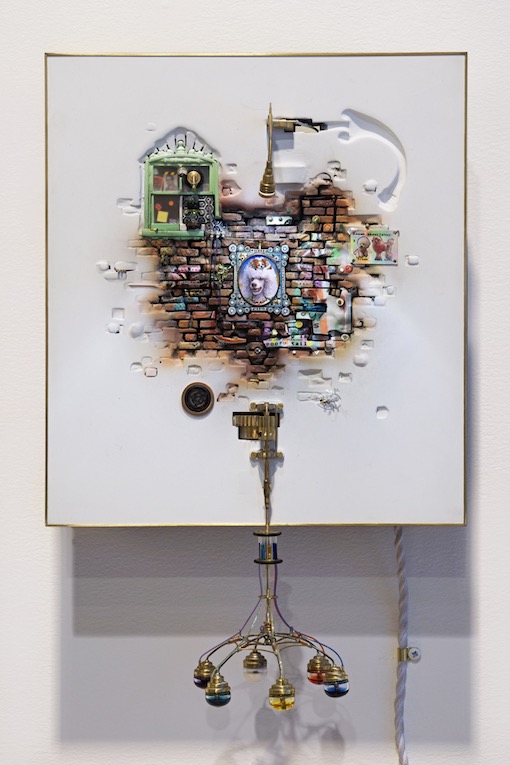 In the Viewing Room
New Work by Chris Millar

As the artist has noted about his recent work:

Hyperfocus is a way to cope with the “too much world” feeling of visual overload. By magnifying focus on the diversity of details embedded in city architecture – bountiful graffti growths, buddleja micro flora, LED corner shop shows, “brick-collage’s” of layered histories, pareidolic hallucinations in air-conditioners, and alien transmitter antennae – I invite the spectator to tune out the unwanted chaos and inhabit fantastical worlds. With the new addition of kinetics and interactivity to my sculptures, these portals open up in real time and unexpected places. Shifting scales of time and space are animated before you, drawing you in to the enchanted, absurd, magical, and hyper-subliminal.

This work was made while living in London, and portrays the feeling of density, congestion, and utter detritus in the south end of the city, combined with the ornate decoration and wealth of the city centre. London is an angsty city, and I think this work reflects that. My work has always been about layering — and London is a city of layering — layering of architecture, cultures, classes…they’re still regularly digging up unexploded blitz bombs that were built over after the war.

Millar thinks of himself as a painter, but also a “doodler” who is in opposition to the prototypical action painter. Painting with gestures of excess, his works are immoderate, and at heart, ridiculous. Pulling from formal influences such as comic books, rock music, video games, television, the art world and pop culture in general, Millar’s works put spoof through a blender, chewing up narrative arcs and spitting them back out in a vortex of idiom, ribaldry and farce. Building his paintings through a multitude of processes and acrylic layers, Millar’s craft is impeccable. His fetishistic, outrageously decadent illustrations of human-folly are both overwhelming and seductive, the ultimate construction for a turbo-culture world.

As his practice has developed and he’s continued to experiment with paint and painting as ‘material,’ and his most recent work has sought to push the tactility and physicality of painting right off the substrate. These paintings, whose images have always been entirely hand painted with no cut-and-paste in the process, now take the substance of paint, acrylic paint skins, to form assembled sculptures that expand the real-estate of the painting to the outskirts of the picture plane. These peripheral extensions represent physical manifestations of the inner narratives, tangential footnotes, or a ‘spilling over’ of the imagery painted on the canvas.

Millar first appeared on the Canadian art scene in the 2005 Alberta Biennale. Born in Claresholm, Alberta in 1977, he completed his BFA at the Alberta College of Art + Design in 2000, and has been short-listed for both the 2005 and 2007 RBC Painting Competitions. TrépanierBaer has presented his work at the art.fair International in Cologne (2006); ARCO in Madrid (2006); and Melbourne Art Fair (2010).  In 2007, Millar took part in the Artist Residency program at ThreeWalls in Chicago, which culminated in a solo exhibition. Millar’s fantastical Bejeweled Doubled Festooned Plus Skull for Girls was included in the 2010 Alberta Bienniale and was subsequently acquired by the National Gallery of Canada.  In 2012, Millar was featured in a solo show at the Art Gallery of Alberta, titled The Transmogrification of the Problem, and was included in the groundbreaking exhibition Oh, Canada at the MASS MoCA. TrépanierBaer has presented four successful solo exhibitions of Millar’s works: Sandwich and Burger Patch (2008); Simon & Farfenougan & Hunter / Bejeweled Double Festooned Plus Skull for Girls (2009); Looking Up at Icicles (2011); and Lost a cartful, Found a wagonload (2014).