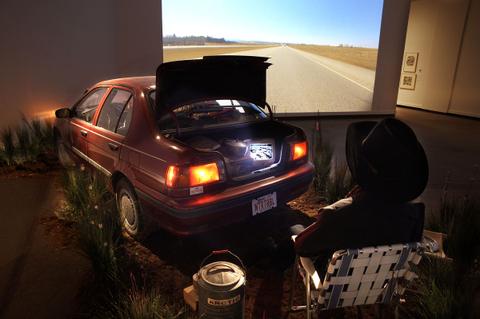 Kent Monkman takes a playful look at the Stampede and First Nations
For those of us who live here, the Calgary Stampede can be many things — beer-soaked debauchery, greasy food, the midway, the rodeo, or simply a time to get the hell out of the city. For artist Kent Monkman, however, the Stampede represents something else entirely.

Commissioned by the Glenbow to create an installation based on 100 years of the Stampede, Monkman, who’s half-Irish and half-Cree, walked around the grounds last year and spoke with First Nations elders in the Indian Village. His work focuses heavily on First Nations issues, toying with representation and veering into questions of queer identity. The result of his meditations on the Greatest Outdoor Show on Earth is The Big Four, his largest installation to date.

The exhibition consists of four vignettes, each centred on a beat-up car. On four walls, video projections show different views from cars travelling the prairie landscape.

Central to the exhibition is the notion of freedom and incarceration. When Monkman explored the history of the Stampede, he was struck by the insistence of the founders that the local First Nations be involved in the celebration. At the time, that meant convincing the political masters of the day to draft passes so that the Blackfoot people could leave the reservation and come to town. Essentially jailed on their land, the Stampede provided a reason to travel, to escape and to engage in the broader world.

Monkman, in a typically playful way, takes this notion and mashes it up with contemporary issues and iconography. The beat up “rez cars” act as symbols of freedom and movement, something relevant to First Nations today, where these cars can provide transportation, shelter and spare parts. The videos show the view from cars travelling down the highway, or fleeing prairie jails — the new symbols of First Nations incarceration. On the dashboard of each car is a replica of an old Indian Affairs travel pass, specifying the reason for leaving the reservation and what each person will spend their money on (Miss Chief is going to buy a Louis Vuitton bag).

But it’s not just the idea of incarceration and freedom that’s being explored — Monkman has also taken the opportunity to poke a little fun at institutions that explore history, including the Glenbow. Each section of the installation is its own take on a historical museum’s vignette. The cars act as display cases for objects, some of which come straight from the Glenbow collection. The mannequins in each scene bear Monkman’s face in a direct repudiation of institutions using one model for different genders and for diverse cultures.

Gone are the tranquil scenes of natives going about their chores, or chasing down buffalo. In Monkman’s representations there’s a woman selling traditional clothing out of a minivan, a native cowboy loading gear into his truck (but with glittery jewelry poking out from his masculine getup), a spectator watching a TV in the trunk of his economy car, and one man, bereft of most possessions, fleeing in a nondescript sedan.

In typical Monkman fashion, he turns history on its end, giving us a contemporary insight into both past and present issues. And, as always, the work is presented with a smirk, encouraging us to laugh while contemplating the serious issues he confronts.

The Big Four by Kent Monkman is on display at the Glenbow Museum until August 18.