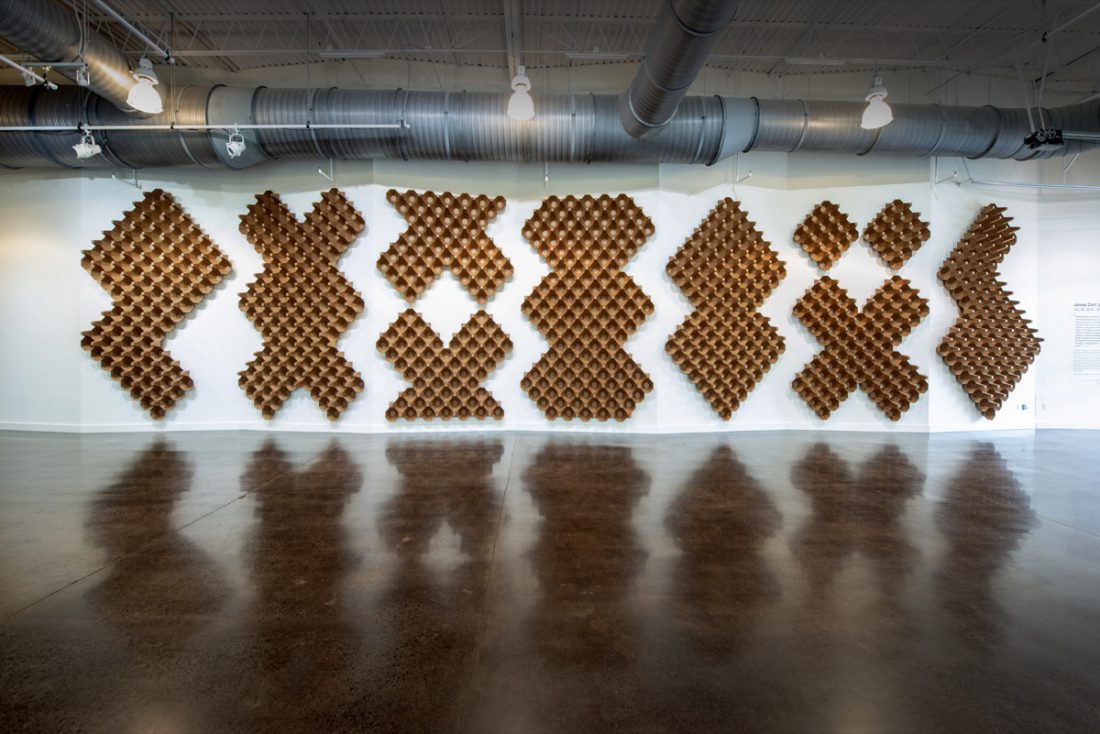 James Carl: oof and woof at the Grounds for Sculpture in Hamilton, New Jersey

TrépanierBaer is pleased to announce that acclaimed Canadian artist James Carl will present new and recent works in simultaneous exhibitions presented at Grounds for Sculpture in Hamilton, New Jersey. Presented in two of the museum’s principle indoor galleries both exhibitions are curated by Chief Curator Tom Moran.James Carl: oof, located in the East Gallery at GFS, is a monumentally scaled wall relief constructed from corrugated cardboard. Carl has created a giant version of the iconic cast-pulp commercial egg carton which is CNC-cut, hand-assembled, and installed by the dozens on the East Gallery’s imposing 80’ long accordion-shaped wall. The relief work is accompanied by a freestanding sculpture entitled “Turnpike Pavilion”, Carl’s plywood hommage to Tony Smith.

Located in the Domestic Arts Building, James Carl: woof features work from Carl’s jalousie series. These woven sculptures, which Carl began making in Paris in 2005, take their  title from the colloquial French name for venetian blinds, jalousie, and the works use the slats from these blinds as their primary material resource. In the jalousie sculptures, the original social function of the venetian blinds—to reveal and to conceal, to divide private from public—is literally tied in knots. The resulting forms make explicit reference to 20th Century biomorphic abstraction, reconfiguring some of its anxieties and eccentricities.

Both exhibitions are typical of Carl’s work from the last 25 years—in their generous visual presence, in their humour, and in the seriousness with which they consider the possibilities for contemporary sculpture.

James Carl has exhibited extensively both nationally in Canada and internationally. The first major survey of his work, entitled do you know what, was presented at the Justina M. Barnicke Gallery at the University of Toronto, the Cambridge Galleries Queen’s Square, and the MacDonald Stewart Art Centre in Guelph. Other recent shows include: jalousie at Galerie Heinz-Martin Weigand in Karlsruhe, Germany; negative spaces at Florence Loewy in Paris; plot at Vancouver’s Contemporary Art Gallery, and bottom feeder at Mercer Union in Toronto, and most recently in Hong Kong in an exhibition titled the Preservationists at Duddells, HK.