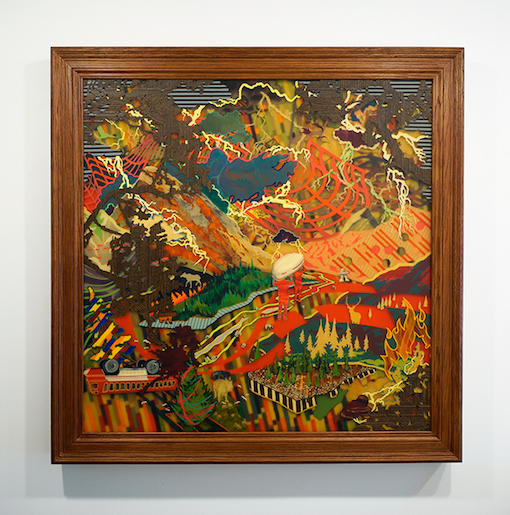 “JOINED AT THE HIP” Partners and painters, together David Foy and Jennifer Saleik are creating something entirely new.

The signature on their artworks, and the label references in exhibitions, reads ‘Dave and Jenn’. David Foy and Jennifer Saleik have gone well beyond the usual interpretation of the term ‘collaboration’ and have forged new paths through joint practice, willingly shedding their individual identities and discovering new techniques and creative results in the process. This is how they got there.

Foy and Saleik met during their first year at Grant MacEwan College in Edmonton, moving on to the Alberta College of Art and Design in Calgary, where they ended up in the same major. Both describing themselves as “shy and socially awkward”, they immediately latched on to one another in the painting program. They discovered parallel interests, and by the time they had reached the end of their third year, they realized that the work they produced together in a collaborative sketchbook was more interesting than anything they’d been doing separately. So the ground was laid for “Dave and Jenn” — the sketches became the focus of their painting in their last year at college.

Collaborative practice is common within the media arts, but much less so in painting. Yet Dave and Jenn work together through all stages of the creative process, even in talking about it. “Over time, we’ve grown together,” they say. “There were individual strengths, but we’ve been trying to share as much knowledge and skill as possible with each other. When we make decisions we do so together — we both have the right to veto. We work on the same painting at the same time, so it does help when the work is larger in scale. We’ll trade places to make sure one thing doesn’t get too much individual attention.” In the conceptual process, they tend to focus on their individual interests and obsessions, and as the work progresses their separate ideas recombine into new forms and images.

To read the entire piece, please click here or open the pdf listed below.