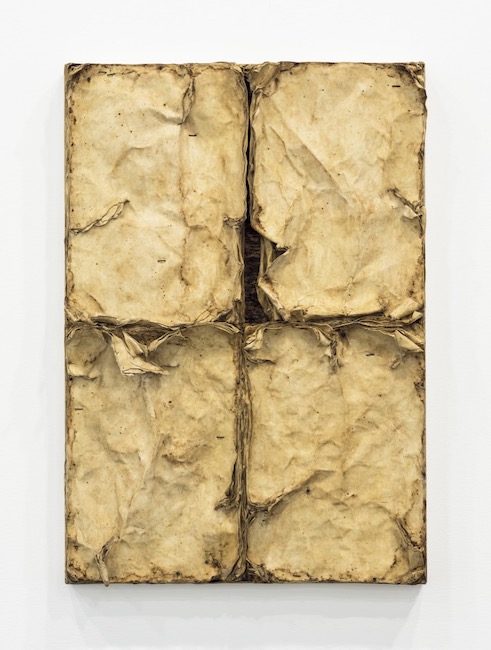 On view now at the TrépanierBaer component of the the ART TO Pop-Up @ SBG in Toronto is a stunning new work by Kent Merriman Jr.  Both painting and sculpture, the work represents an elision of genres, and the myriad potential of various media when used in non-traditional ways.   When describing the artist’s practice, curator Nancy Tousley noted:

Related to still life, Merriman’s remarkable painting-objects address the body. As objects in space, they are uncanny in their ability to convince a spectator that they are in fact ordinary things, such as flattened cardboard boxes, tattered poster boards or stacks of books. Instead they are three-dimensional trompe l’oeil objects that have eluded the Renaissance space of one-point perspective to step into the spectator’s own surroundings. Moreover, with formidable representational skills, Merriman has given them fictional lives that he narrates on their descriptive surfaces. Many represent abject things gleaned from back alleys that have been acted upon by age, weather, climate, misuse and disregard. As allegories of the body, they recast the memento mori of the Dutch 17th-century still life in a contemporary realist idiom that elicits empathy from the spectator.

Merriman’s own empathetic response to the condition of things in the world distinguishes him from other artists dealing with simulation. It lies at the heart of his ability to embody what Jean Baudrillard, writing on “The Trompe l’oeil” in 1988, saw as haunted metaphysical objects. The metaphysical object is one that looks back at the spectator who in its presence is no longer on secure footing in relation to painting. With the sovereign gaze of one-point perspective dismantled, the spectator is radically decentered, as in no longer the centre of the universe. Merriman takes this further by radically decentering painting as well, opening it to wider interpretation and to ideas of multiplicity and otherness.

Kent Merriman Jr. received his Bachelor of Fine Arts in Painting from the Alberta College of Art + Design (ACAD) in 2013; and lives and works in Calgary, Alberta. He is the recipient of the Amber Bowerman Scholarship, Painting Scholarships from ACAD, and the Jason Lang Scholarship from the Government of Alberta.

Since the completion of his studies, Kent Merriman Jr. has exhibited across Canada and in the United States. Solo exhibitions of note include In the Pocket of Time at TrépanierBaer (2018), and Ignominious at Bel Ami, Los Angeles (2017). Kent Merriman Jr. was featured in Glenbow Museum’s One New Work series curated by Nancy Tousley. The exhibition was titled Remnants and was on view in the summer of 2019.