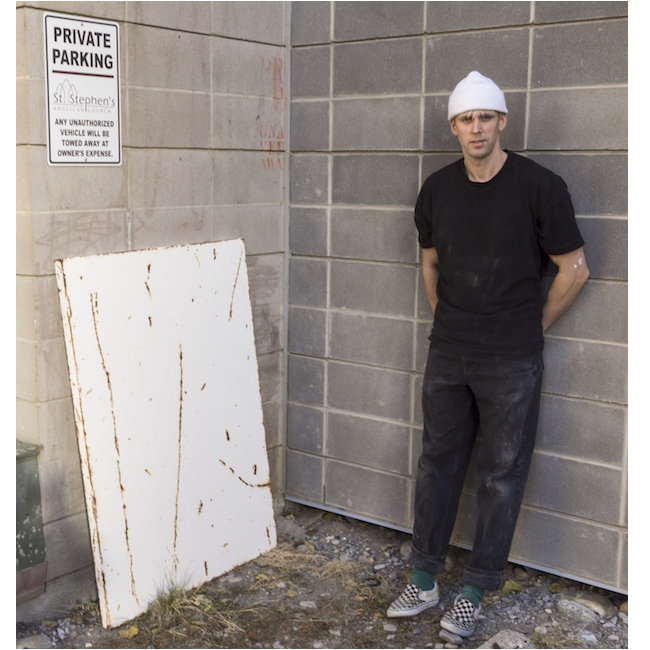 Kent Merriman Jr. – In the Pocket of Time

TrépanierBaer cordially invites to you to join us for the inaugural exhibition of Kent Merriman Jr. – In the Pocket of Time

Kent Merriman Jr. is often described as a realist, however, his work goes beyond mere mimesis. One is reminded of the Nouveau réalisme of the 1960s, established by Yves Klein and Pierre Restany, a group of artists who appropriated reality by “recycling urban industrial and advertising reality” in an attempt to “bring life and art together.” Kent is similarly motivated. His latest paintings appear to be representations of discarded metal panels of various sorts; the discarded rusted objects found in scrap metal yards, construction sites and recycling bins. These mundane objects may be the inspiration for his most recent paintings, but as important as the objects are, it is the element of time and its effect on them that truly inspires him. The impeccable surfaces of his paintings, with their flawlessly rendered rusted lacerations, scars and bumps, serve as more than mere representations of the real; instead the works mysteriously transform into quiet metaphors for the fragile, vulnerable and finite realities of our lives.

Kent Merriman Jr. received his Bachelor of Fine Arts in Painting from the Alberta College of Art + Design (ACAD) in 2013; and lives and works in Calgary, Alberta. He is the recipient of the Amber Bowerman Scholarship, Painting Scholarships from ACAD, and the Jason Lang Scholarship from the Government of Alberta. Since the completion of his studies,  Kent Merriman Jr. has exhibited across Canada and in the United States. Last year, he presented works in a solo exhibition titled Ignominious at Bel Ami, Los Angeles. Recent and notable group exhibitions include:  NADA Miami Fair with Bel Ami (2017);  A Rehearsal for What?  Bel Ami, Los Angeles (2017); Faux Pas, Farhenheit Gallery, Los Angeles (2015); and VOTED MOST LIKELY, Contemporary Calgary (2015). Kent Merriman Jr. is included in a group exhibition titled BODY at L’inconnue in Montréal. Curated by Domenico de Chirico, this exhibition is on view until the end of January 2019. He will be featured in Glenbow Museum’s One New Work series, curated by Nancy Tousley, in the summer of 2019.