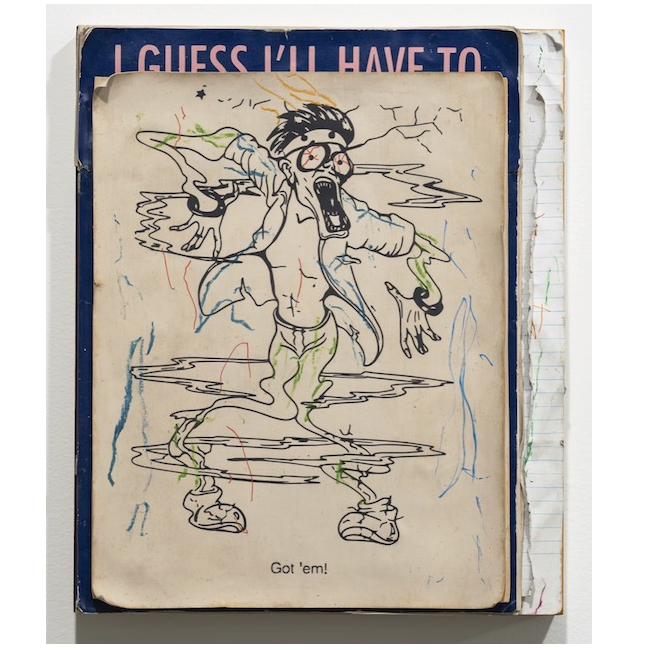 TrépanierBaer is thrilled to open THERE, STILL, an exhibition of new and recent works by Kent Merriman Jr.

An acute observer of the commonplace, Merriman presents the world and its mundane objects in ways that imbue them with renewed meaning. A meticulously painted towel – worn, threadbare and discoloured – hanging on a simulated wall resonant with the spirit of its former owner, becomes a sign of a life lived. The pages of a discarded colouring book with its half-finished drawings and text are brought back to life in a sort of second state resurrected by the artist’s extraordinary skill, and is re-presented with contemporary meaning. The uncanny representations of these works conceals their artistic origins, while simultaneously presenting an illusion between a medium (paint) and a genre (sculpture) that are generally perceived as separate entities.

“Kent Merriman Jr.’s paintings have a startlingly real presence. They inhabit our space exuding confidence that they are more than mere illusions. They are physically assertive objects in the world and the the uncanny doubles of what they depict. The shadows they cast are real shadows; the light that shines on them is real light…

Merriman pushes against the boundaries of traditional realist painting and window-on-the-world illusionism. To break the tyranny of the picture plane he removes the frame from painting as a shallow, two-dimensional illusion rendered on a flat surface and opens it up to the air. To bring in the third dimension he concocts a form of trompe l’oeil that weds painting to sculpture. His paintings are not only three-dimensional; they are hyper-realistic. Layering, modeling and carving paint as if it were intended to be a multidimensional material, Merriman makes objects that challenge both the limits of painting and the viewer’s grasp of reality….

Viewers are taken in, shocked, delighted, amazed by the deception. But by definition, realism is not reality; trompe l’oeil is optical illusion.  What is real is their unreality and it is a tour de force.”

Kent Merriman Jr. received his Bachelor of Fine Arts in Painting from the Alberta University of the Arts ( formerly the Alberta College of Art + Design – ACAD) in 2013; and lives and works in Calgary, Alberta. He is the recipient of the Amber Bowerman Scholarship, Painting Scholarships from AUA, and the Jason Lang Scholarship from the Government of Alberta. Since the completion of his studies, he has exhibited across Canada and in the United States. In 2019, Kent Merriman Jr. was featured in two exhibitions: in Glenbow Museum’s One New Work series, in a solo exhibition titled Remnants, curated by Nancy Tousley; and in a group exhibition titled BODY at L’INCONNUE in Montréal, curated by Domenico de Chirico.   Solo exhibitions of note include In the Pocket of Time at TrépanierBaer (2018) and Ignominious at Bel Ami, Los Angeles (2017). Recent group exhibitions include: ART TO Pop Up @SBG with TrépanierBaer (2020); NADA Miami Fair with Bel Ami (2017); A Rehearsal for What?  Bel Ami, Los Angeles (2017); and VOTED MOST LIKELY, Contemporary Calgary (2015), to name a few.