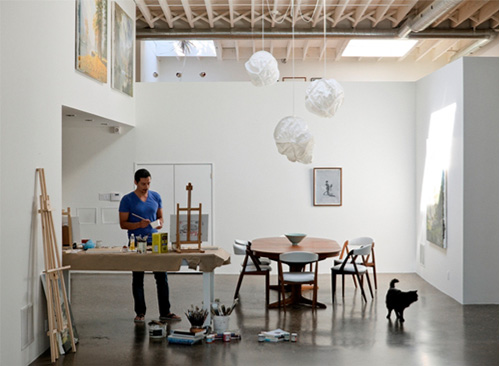 Inspired by the history of the iconic Calgary Stampede at the time of its 100th anniversary in 2012, The Big Four is a new work by acclaimed Canadian artist Kent Monkman, commissioned by Glenbow Museum.

Monkman plays with numerology in the title of the exhibition: the number four refers to the financial backers of the first Calgary Stampede and is also of symbolic importance to many indigenous nations, including the Blackfoot of southern Alberta. The installation centers on four “junker” automobiles, that function as display cases for video works, native-themed collectables and artifacts from Glenbow’s collection.

These kinds of scrapped cars serve a multitude of practical purposes in economically marginalized communities: potential transportation, a necessary source of spare parts or even shelter.

One of the vehicles in the installation is an “escape car” – a reference by the artist to the systematic institutionalization of Aboriginal people through the reserve system and residential schools. This legacy of incarceration continues today in the form of the disproportionate numbers of Aboriginal people in the Canadian prison system.

Monkman relates these ideas of incarceration and mobility to the first year of the Calgary Stampede. In 1912, the Stampede’s creator, Guy Weadick, had to secure permission from the federal government for Aboriginal people to legally leave their reserves to participate in the inaugural Stampede.

In The Big Four, Monkman uses his trademark insight and wit to create a multi-layered narrative that illuminates the significance of mobility and transportation while encouraging questions about the disparities that have plagued the relationship between Aboriginal and non-Aboriginal society throughout our shared history.