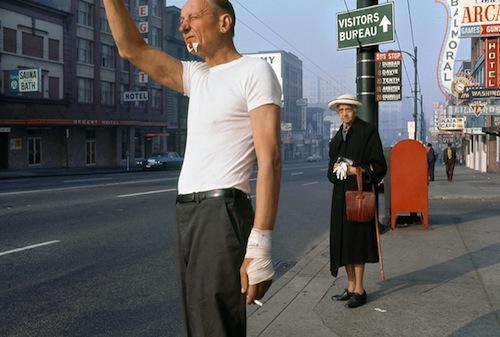 It’s the old quarter somewhere in the new world — a strip of sad, drab buildings punctuated by blasts of colourful commercial signage advertising hotels, pool halls and even a bathhouse.

It’s Vancouver’s Downtown Eastside, just outside the Balmoral Hotel, currently the notorious stomping grounds of the city’s dispossessed. Here, in this photograph, the street reflects a less turbulent time (1968 to be precise) and is populated by just two people — a man in the foreground, a large bandage encasing his chin, attempts to hail a cab while behind him, a woman, looking the part of the quintessential little old lady, waits for the bus.

Both completely banal and utterly beguiling, this fleeting moment in time, frozen in two-dimensions, hangs on a second floor wall of the Glenbow Museum, part of an exhibition by Fred Herzog, a pioneer of Canadian street photography.

Melanie Kjorlien, the museum’s vice-president of access collections and exhibitions, stands before the photo, marvelling at both its aesthetic appeal and technically flawless execution.

“He was working with cameras where there was no autofocus and he was doing manual exposures,” she says. “I think that’s what makes these photographs so special, because they are so good.”

The photograph’s focal plane is indeed tack sharp, flowing left to right on a forceful grid of converging lines — the image’s vividness betrays nothing of the fact that the print was produced from a 45-year-old transparency.

Even more impressive is that Herzog captured the moment by literally shooting from the….

“On the day that I took this picture, I had borrowed a wide-angle lens from a friend,” he recalls. “When I was walking down the street, I saw the scene beginning to take shape. My camera was hung across my chest and was resting near my hip. I knew that the scene would be lost if the people were aware of me and the camera, so I took the photograph with my camera on my hip.”

You could chalk up the resulting composition to a fluke — were it not for Herzog’s vast catalogue of similarly artful and compelling street scenes of Vancouver’s Downtown Eastside in the 50s and 60s. But while these images are clearly the work of a master, it took half a century for the art world to recognize him as such.

Herzog immigrated to Canada from Germany in 1952 and landed in Vancouver in 1953. By day he worked as a medical photographer, but during his off hours he endlessly trolled his adopted city’s east end, candidly capturing a gritty mélange of people and places.

However, in doing so, Herzog found himself operating outside the accepted conventions of both dedicated amateurs and professional documentarians alike.

Of the former group, Herzog says, “When I first arrived in Vancouver, I looked for camera clubs to join and I was optimistic that they would be interested in my style of taking photographs. There was some interest, but I found that most camera clubs valued a certain type of imagery — sunsets, tulips, babies, etc… and that my photographs, for the most part, did not fall into those categories.”

Instead, he chronicled a modern multicultural metropolis emerging from the dank cradle of a provincial port town.

When you think about the 1950s in particular — that nuclear family, idealized portrait of middle-class America — you think about Life magazine and sort of what that represented,” says Kjorlien, remarking on the contrast between Herzog’s work and the prevailing social iconography of his time. “Fred came from Germany and came into Vancouver, and looked at it with really fresh perspective — that outsider’s perspective.”

But while Herzog was out of step with the mainstream, ironically the art world was even less accepting, as his chosen medium — colour Kodachrome film, then a new format — was viewed by the fine art world as the provenance of commercial photographers and dilettantes.

“It’s funny to think about it now… what’s available to people today in terms of photography, with digital photography and everything else — you just think, well what’s the problem with colour photography, right?” she continues. “But, he just embraced it — he liked the fact that the Kodachrome film could give you such high-resolution images and also that the colour saturation is so good.”

Such prejudice towards colour, believe it or not, still lingers into the present day — if you take a beginner’s photo course, for instance, don’t be surprised if the instructor tells you that the way to judge if an image is compositionally sound is to look at it in black-and-white and see if it still works. Such advice is a decent enough guideline for those first learning about S-curves and depth of field and whatnot, but it doesn’t hold water when considering pieces on the level of Herzog’s work, wherein the colour is an integral compositional element.

Also, looking at these pieces from a contemporary vantage point engages a sense of melancholy in that Herzog’s portfolio is a kind of terminal document for a vanishing world that’s being bulldozed to make way for more monochromatic city space — all aquamarine condos and beige suburban sprawl.

“He’s talked about this neighbourhood in Vancouver that he really likes to photograph called Strathcona, and what he likes about it is the fact that everything is different, that people still have within their neighbourhood some individuality expressed,” says Kjorlien.

“Contrast that with some of the neighbourhoods that we have today where your house colour is governed, the type of fence you have is governed, the kind of siding you have… there’s only five different styles of homes that are allowed in a particular neighbourhood…. There’s a real contrast between those two kinds of things.”

Perhaps the long gestation of Herzog’s critical ranking makes sense then — as we move farther away from the kind of communities found in his photographs towards increasingly homogenous surroundings, the stark relief between the two worlds could no longer be ignored.

And though it took a while for the art scene to come around to recognizing Herzog’s vision, now that it has, it’s at full throttle — the Glenbow exhibition, part of the National Gallery of Canada’s On Tour program, is just one of two in the city at the moment (Trépanier Baer hosts the other). Kjorlien says the momentum first began with a retrospective of Herzog’s work in Vancouver in the early 2000s, but that it’s only really been in the last five years that interest at the national level has exploded.

If anything, Herzog, now 83 years old, seems somewhat nonplussed about the renewed focus on his life’s work.

“I am a bit surprised at the attention — I am now public property. But I think my pictures are good,” he says, adding that he’s not quite done yet. “I still go walking as much as possible with my camera. For me, walking is the most important thing that goes with picture-taking, and I find that what is important to me is invisible — unless I manage to photograph it.”