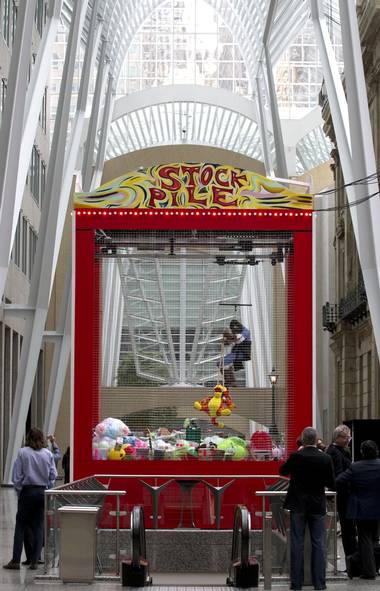 Luminato’s Stockpile: Look way up. Is it an owl? A man-owel? The a giant claw?

No one knows who precisely dreamed up the idea that on Thursday morning saw Graeme Patterson don an owl mask, festoon his arms and legs with feathers glued to pantyhose, then enter a wire-mesh cage to be hoisted in a seat seven metres above the floor of the Allen Lambert Galleria on Toronto’s Bay Street. There, suspended by a pulley-and-track system that moved him back and forth and up and down, Patterson attempted, with a pair of tong-like talons, to pluck various objects from the bottom of the cage – beach balls, plush toys, a wicker picnic basket, a mannequin’s arm – and drop them individually through a hole on the stage floor.

Got that? Don’t worry if you don’t because the sheer Rube Goldbergian wackiness of Stockpile, as the Galleria project is called, almost beggars description. It has to be seen – and participated in – to be believed. And see it you can for the next eight days, in the heart of Toronto’s normally stodgy financial district, as part of Luminato 2013.

If Stockpile’s origins – that Eureka moment when the improbable suddenly seems possible – are fuzzy, it’s because the project, with Patterson as the highlight of its media preview Thursday, is a manifestation of the old saw about a camel being a horse designed by committee. In this instance, the committee is a group of nine Canadian artists – six men, three women – who last year at this time were among the 60-plus creative types whose work was being featured in Oh, Canada at the Massachusetts Museum of Contemporary Art.

The single largest exhibition ever in North America of contemporary Canadian art, Oh, Canada attracted tens of thousands of visitors to North Adams, Mass., before its close in April this year. Among the impressed was Jorn Weisbrodt, artistic director of Luminato, who, after seeing it, invited the show’s curator, Denise Markonish, to Toronto last fall for some detailed talk. Said Markonish: “We both struck on the idea, What would happen if we asked a group of Oh, Canada artists to collaborate? Because for us, part of the really interesting thing about Oh, Canada was how it brought together a community, and how do you extend that once a show is closed?

“I think from the get-go we knew we wanted it, whatever it was going to be, to be performative,” Markonish observed, rather than a static showcase of, say, extant works by selected Oh, Canada artists or an exhibition dedicated to just one Oh, Canada luminary. Returning to MASS MoCA from Toronto, Markonish proceeded to hunt through the many contacts she’d made in almost five years of preparation for Oh, Canada and draw up a list of artists she thought would be game to forsake their individual practice and aesthetic concerns to produce one special something that would play out over the duration of Luminato and even require audience participation.

The Oh, Canada artists – Patterson, 33, among them (Saskatchewan-born, now living in Sackville, N.B., he’s known for his sculptural and multimedia installations) – met three times in Toronto over four months. At one point, according to Weisbrodt, the nine hit on the idea of building “this gigantic machine … that would be activated through the rush of people coming and going, and make all this noise and rattle and everything.” But nothing came of it. Indeed, it was only at the “very, very end of the last session,” in late January, that they announced their concept – an oversized version of that carnival and arcade staple, the claw machine. Each artist would take a turn at being the claw. The prizes would be donated by the community. And the claw would be manoeuvred by an audience member who’d pay a nominal fee for the experience. (The fee-for-play has now been set at $2, the “claw’ is directed electronically by two SEW-Eurodrive “joy-sticks,” the seeing is free.)

Thursday afternoon, the artists and their crew were still sorting out the project’s mechanics and rules: What time limit should be set for each participant? Besides the talons, should we use over-mitts? Boxing gloves? Ballet shoes? How many times should the claw be allowed to try to grab a particular object? “It’s not so easy,” Patterson remarked after his demonstration. Like all the other Stockpile artists, he’ll be wearing a uniform of blue for his performances, albeit personalized, in his case, with feathery bits. “I’ve made other sorts of anamorphic costumes before but never a bird. I kinda had this idea of the bird in a cage, kinda floating around in there.” He laughed. “This is definitely a once-in-a-lifetime opportunity.”