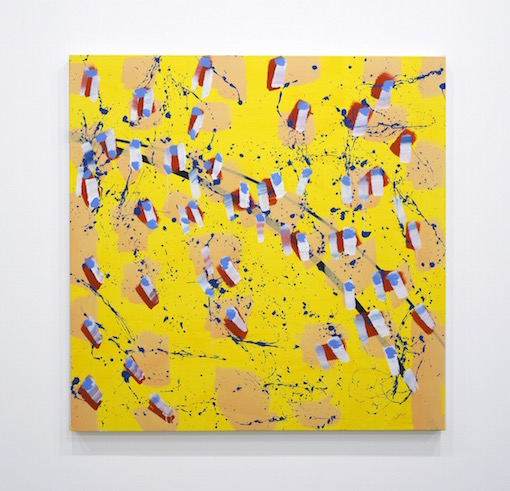 “In order to understand where Marcel Barbeau’s work is coming from, we must – like the artist himself, who has travelled and created on several continents – be everywhere and nowhere at once, at the juncture where the refusal to conform allows for absolute freedom of creative expression. Barbeau’s paintings and sculptures, along with the music and dance that have accompanied them, are all dictated by the constant of change. They are attuned to the evolution of culture and society. Highly experimental in its expression, the work of this great artist is a powerful testimony to the necessity and the sheer pleasure of creation. The art of Marcel Barbeau is that of a man in perpetual motion.”  From the Governor General’s Award tribute to the artist, 2013

TrépanierBaer is pleased to present Amour, champagne et autres choses, an exhibition of works of different genres by the late Marcel Barbeau (1925-2016). Anchored by a series of recent paintings, as well as paintings from various periods of the artist’s career, the exhibition also presents works on paper, including a rare work titled Premières Îles d’océan trompeur from 1957. Throughout his career, Barbeau had a keen interest in music and dance, and on view for the first time in the gallery are photographs that record a performance he made with the Anna Wyman Dance Theatre in Montréal in 1978. Additionally, Barbeau produced serveral sculptural works which are also included in this exhibition.

Marcel Barbeau was the youngest founding member of Les Automatistes, a catalytic group of Québecois artists credited with literally revolutionizing the art scene in that province in the late 1940s. Along with Paul-Émile Borduas, Jean Paul Riopelle, Pierre Gauvreau, Marcelle Ferron and others, he was a signatory to the ground breaking cultural manifesto Refus Global in 1948.  His works were certainly some of the most inventive works of the group. Marcel Barbeau has been included in every major exhibition featuring the Automatistes since the 1940s.

A member of the Royal Canadian Academy of Arts, Officer of both the Order of Canada (1995) and the National Order of Québec (2015), he was the recipient of the Governor General’s Award, the Prix Borduas and the Louis-Philippe Hébert Prize, all in 2013. These distinctions are three of the highest awards in the visual arts community of Canada. Marcel Barbeau passed away on January 2, 2016 at the age of 90.